Organization:
American Association for the Advancement of Science (AAAS)

Monitoring Techniques Used: During the decades-long conflict between the Sri Lankan Government and the Liberation Tigers of Tamil Eelam (LTTE), several military zones were established, resulting in the eviction of several thousand Sri Lankan residents. The Sri Lanka Campaign for Peace and Justice (SLC) has been advocating for the resettlement of residents to one of these military zones, the Valikamam High- Security Zone (HSZ), located within the Jaffna Peninsula. At the end of the conflict in 2009, former residents of the designated Valikamam HSZ were unable to resettle, as the government appropriated the land for “public use.” Although civilians’ use of the area remains restricted, it appears that the land is being used for private interests. In order to gather evidence of this, SLC requested the expertise of AAAS to acquire and analyze time series high-resolution satellite imagery of the HSZ.AAAS researchers first identified areas that had both been under military control and that had purportedly been sectioned off for “public use.” Then, they monitored the growth of structures in the area over the project’s five-year period.  All structures present in the series of images from 2009, 2011, and 2014 were counted and subsequently analyzed by satellite imagery experts. The satellite imagery analysis was supplemented by publicized evidence of private exploitation of the land. For example, the Sri Lankan Government website includes a Google Earth map indicating the exact location of the Thalsevana Holiday Resort (within the HSZ).

Summary of Findings: The analysis exposed potential contradictions within the original justification for seizing the land. Between 2009 and 2014, the images revealed a considerable decrease in public-purpose infrastructure, and an increase in housing-type structures and agricultural activity. In 2009, there were 3,215 buildings and 35% of them were categorized for public use, such as hospitals. By 2014, there were 4,731 buildings, however, only 24% were considered public infrastructure. Some of the identified structures indicate farming and resort tourism plans by the military, which fall outside the mandated use of the land.
Advocacy and Impact: The expert imagery analysis by AAAS provides visual documentation of land and housing violations. Such evidence supplements the monitoring efforts of human rights groups like SLC and may offer support to the legal efforts of roughly 2,000 refugees who have petitioned the Sri Lankan high court to return to their homes in the Jaffna Peninsula. 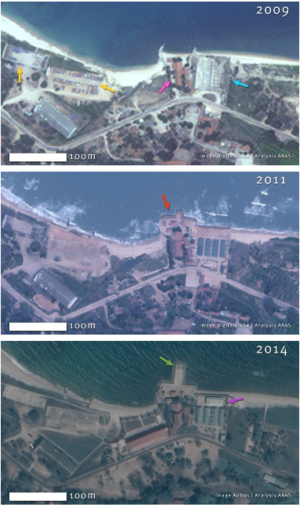