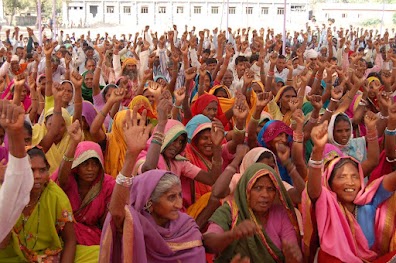 ESCR-Net member, Ekta Parishad, has achieved a massive victory. Just nine days after the launch of the Jansatyagraha, a historic march to demand a right to land and livelihood, the Government of India announced its acceptance of the movement’s key demands. The march, which began with over 35,000 landless people in Gwalior on October 3rd 2012, was planned to increase in size, projected to reach a record of 100,000 people upon reaching New Delhi on October 28th. Ekta Parishad, a robust social movement in India, had initiated this march to demand access to land0. The movement’s leaders have argued that that the country’s high levels of landlessness and growing instances of land grabbing must be reduced in order to reduce poverty and achieve the country’s development goals. On October 11th 2012, the Indian Government’s Ministry of Rural Development (MoRD) signed an agreement in Agra with representatives of the Jan Satyagraha where they agreed to address the major demands raised by the Marchers and committing to a 10 points action plan within an agreed time frame.  The major points of the agreement include the establishment of a draft national land reforms policy in the next 6 months, and the adoption of a legal provision to provide agriculture land to landless people and homestead land. Please see more about this historic achievement here . Please join us in congratulating Ekta Parishad and their members for this great victory!

Several members of ESCR-Net's Social Movement Working Group have also joined in solidarity with Ekta Parishad's struggle. Representatives from the Movement for the Survival of the Ogoni People marched alongside the movement's Indian members during the launch of the Jansatyagraha, and several other movements in Africa, the Americas and Asia issued expressions of support for their demands