Sept 5, 2012: Ekta Parishad and the Jan Satyagraha March for Justice 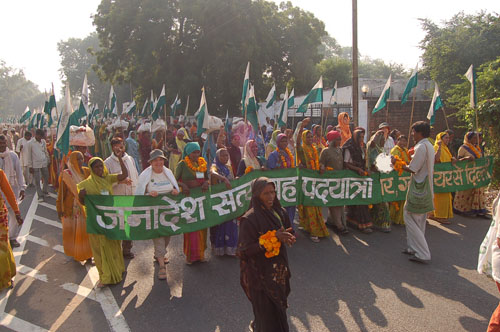 Land rights are human rights if they provide dignity and livelihood opportunities to the landless and marginalized. Land rights have been at the base of successful poverty eradication programs in many countries worldwide for the past half-century. Having a small landholding provides people a base from which to build life and livelihood.  This is key factor in removing extreme poverty and guaranteeing food security --important in achieving the United Nation’s Millennium Goals by 2015.

People need to also defend the small land holdings that they currently have in the face of massive expropriation and appropriation.  Land pricing, land profiteering, and land speculation/investments are fueling land grabbing for expanding industrial farms, biofuels, infrastructural development, and industrial development. This needs to be resisted by local people in cases where their food security and livelihood is jeopardized.

As a response to increasing landlessness, the Jan Satyagraha March for Justice is taking place in India in October 2012.  In this march, 100,000 people will be walking for one month in defense of their land rights. Thereare indigenous people walking with outcaste dalits,  along with minority groups and pastoralists as well asfisherfolk. People will begin walking on International Day of Non-violence, October 2nd; and they arrive into the national capital, New Delhi on October 29th. In the course of this foot-march (padyatra) – eating, sleeping and marching on the national highway-- they are making themselves visible to the larger society; and pressing the Government to implement existing land reform legislation.

Landless poor people from around the world are encouraged to participate in this march in solidarity. These include the following actions:

·         Any action on October 2nd, the International Day of Non-Violence (and Mahatma Gandhi’s Birthday) will be appreciated. A film on the October 2nd mobilization in India will be distributed to anyone outside India requesting it (either through drop-box or other methods of transferring large files and there will be a shorter versionon the EktaParishad website.)

·         Any solidarity action that you take up in the course of October in your locality or country, please send a video clip or photos to www.ektaparishad.com or www.ektaeurope.org .

·         A virtual march of a million viewers alongside the 100,000 marchers in India will begin on October 2nd. We are hoping that everyone will become a virtual marcher! We are hoping to produce daily documentaries of the JS India March. (We currently working on technology to allow for more proximate virtual viewing with the marchers.)

·         On October 10th, and October 15ththe marchers on the JS March in India will view videos from other countries showing solidarity actions.

·         October 17th is a special day UN Eradication of Poverty Day and Stand-up Against Poverty Day. Collective actions worldwide are expected to take place on that day.

·         October 29th is the day JS Marchers walk into Delhi. It is proposed that we make this International Day for Land Rights for the Marginalized. 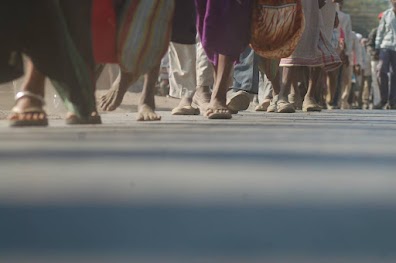