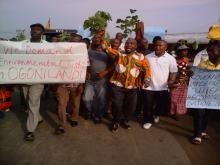 Thousands of Ogoni people, led by  the Movement for the Survival of the Ogoni People (MOSOP), mobilized to mark this year's International Human Rights Day (December 10, 2013) with a peaceful protest against the Federal Government of Nigeria over its denial of the Ogoni people's right to clean and safe environment thus compromising her right to life amongst others. The Ogoni movement denounced the inaction of the Nigerian Government relating to the implementation of recommendations of the UNEP environmental assessment report on Ogoni. The report, which was released over two years ago, declared Ogoni a wasteland and a death zone.The demonstration marked the beginning of series of mass actions planned to be carried out to influence change on the part of government.

The Ogoni people and their civil society allies gathered in the Akpajo community of Eleme Local Government Area of Ogoni, Rivers State  with placards displaying statements including: "No to Environmental Pollution, Our Environment, Our Life”; “Restore Our Environment Now”; “Environmental Degradation Undermines Our Food Security, Clean our Land, Secure Our Future."

Addressing the crowd, MOSOP President Legborsi Saro Pyagbara stated that “a clean and safe environment is our inaliable right and Ogoni would not accept anything less”. Read here a full text of the MOSOP statement marking the International human rights day. 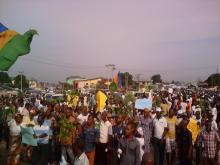 In August 2013 MOSOP issued a ninety-day ultimatum to the Federal Government of Nigeria to implement the UNEP report. On November 10, on the occasion of Ogoni Martyrs' Day, MOSOP warned that it would lead Ogoni to commence a series of mass actions to express their disapproval should government fail to take action on the matter.