At the request of the Bahrain Center for Human Rights (BCHR), the Geospatial Technologies and Human Rights Project of the American Association for the Advancement of Science (AAAS) used a time series of satellite imagery to examine land use and land cover changes that have taken place in the Kingdom of Bahrain over the past 40 years. BCHR had expressed concern regarding environmental change occurring in the country, particularly the impact of such change on non-affluent citizens, including with regard to access to water and the coastline; massive urbanization, including land reclamation projects; and changes to vegetation.

AAAS acquired images from NASA’s Landsat series of satellites. All images were captured in the summer months to ensure that detected changes were the result of actual changes in land use and land cover rather than seasonal variation. Each image was visually inspected to determine if geometric correction was necessary; radiometrically corrected using a simple dark object subtraction technique; classified using an unsupervised classification algorithm; and validated. Their analysis focused on three types of changes:

The extent and location of land reclamation: Bahrain's total land mass grew from approximately 650 km2 to 730km2, or 12.5%.

Vegetation loss, particularly the loss of date palm trees: Analysis of trends in the total amount of vegetation was inconclusive. However, substantial changes in vegetation patterns were observed including the loss of vegetation in the area around Tubli Bay and the conversion of land in the west and center of the island into agriculture and landscaped vegetation.

Quantification of the extent of urbanization: the amount of built up area on the island more than doubled from 76.2 km2 to 155 km2.

These observations represent major changes in the land use and land cover of Bahrain that will impact the environment in as yet unknown ways, raising interesting questions about the human rights impact of urban planning and land-use policies in the country. 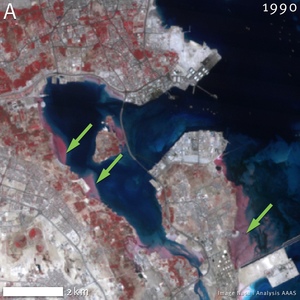