A global perspective on repression of social protest

ESCR-Net Members Center for Legal and Social Studies (CELS), the Legal Resources Center (LRC), the Kenyan Human Rights Commission (KHRC) and the Egyptian Initiative for Personal Rights (EIPR) have participated in the report “Take back the streets: Repression and criminalization of protest around the world,” recently launched by The International Network of Civil Liberties Organizations (INCLO).

This document has been produced by a group of ten of domestic human rights organizations articulated within the INCLO, all of which advocate for human rights via a mix of litigation, legislative campaigning, public education and grassroots advocacy. Participating organizations are the American Civil Liberties Union, the Association for Civil Rights in Israel, the Canadian Civil Liberties Association, Centro de Estudios Legales y Sociales (Argentina), the Egyptian Initiative for Personal Rights, the Hungarian Civil Liberties Union, the Kenyan Human Rights Commission, the Legal Resources Centre (South Africa), and Liberty (United Kingdom). The tenth member of INCLO, the Irish Council for Civil Liberties, contributed editorially. 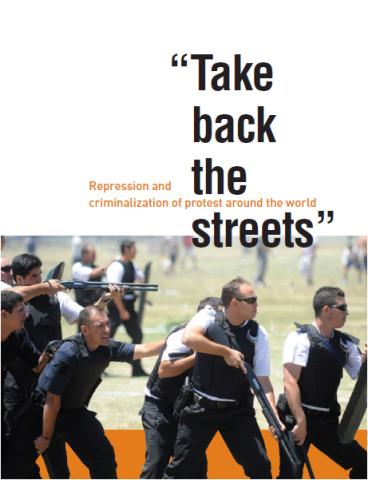 The report, “Take back the streets: Repression and criminalization of protest around the world,” is INCLO´s first contribution to a human rights discussion regarding the global phenomenon of massive protests around the world. The cases included in the report present contemporary examples of unique state reactions in different domestic contexts, regarding instances of excessive use of force resulting in injury and death, discriminatory treatment and the criminalization of social movements and grassroots leaders. Notwithstanding the fact that all the cases come from different countries, involved in distinct substantive debates and unique social contexts, it highlights a number of common themes.

The disproportionate and illegal use of force, including lethal and deadly force, to repress social protest and expressions of dissent has also been the focus of several recent Urgent Actions coordinated by ESCR-Net within the System of Solidarity and Support. These include collective letters circulated in July, 2012 in response to the killing of several protesters in Peru who mobilized to express their opposition to the expansion of the Conga gold mine and police violence against people who had organized to resist their forcible displacement to make way for a steel plant in northeast India.