Land restitution to the Sawhoyamaxa in Paraguay

On May 21, 2014, the Paraguayan House of Representatives approved a law for the restitution of the Sawhoyamaxa lands.  The House followed the Senate in affirming that the 2006 decision of the Inter-American Court of Human Rights ordering the restitution had to be enforced. The President sanctioned the bill last June 11th. The Court’s decision denounced to the eviction of the Sawhoyamaxa, in a process that was initiated by the Paraguayan State in 1991.  Following this dispossession, the Sawhoyamaxa were compelled to settle on the side of a highway, without access to basic essential services,  including water, food, education and health services.

The approval of the law on restitution is a major victory for the Sawhoyamaxa, who courageously reoccupied their lands in 2013, and for other indigenous communities in Paraguay who have been displaced or are at risk of being displaced from their lands. This is also a victory for Tierraviva, an ESCR-Net member organization based in Paraguay, which has represented the Sawhoyamaxa for more than a decade, as well as for other indigenous communities and human rights NGOs worldwide.

ESCR-Net members have supported the enforcement of land restitution in Paraguay through a series of advocacy efforts.  ESCR-Net’s decision to focus collective advocacy on the implementation of the Paraguayan cases of the Sawhoyamaxa, the Yakye Axa, and the Xámok Kásek was taken in a regional meeting on enforcement held with the key support of Dejusticia (Colombia) in February 2013 (for the meeting’s report, click here). In September 2013, representatives of the Sarayaku people (Ecuador), Dejusticia (Colombia), and Fundación Pachamama (Ecuador), with the support of ESCR-Net, came together at meetings organized by the Enxet-Sanapaná people, including the Sawhoyamaxa, and Tierraviva in Paraguay. The meetings resulted in the adoption of a declaration of mutual support to demand that the 2014 government budget included enough funds to buy the lands of the Xámok Kásek, to expropriate the lands of the Sawhoyamaxa from private landowners, and to complete construction of a road to access the alternative lands of the Yakye Axa.  Regarding Ecuador, the Declaration highlighted that explosives must be removed from the Sarayaku land. 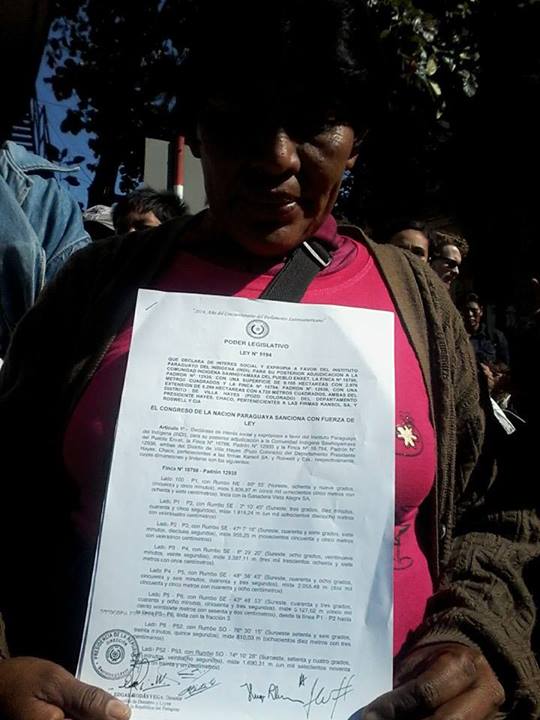 In December 2013, the network sent letters to the President of the Republic of Paraguay, Horacio Cartes, as well as to the Presidents of the Commission on Land Reform and Rural Wellbeing, the State Accounts and Financial Management Commission and Juan Dario Monges Espinola, the Finance and Budgets Commission of the Senate of Paraguay. The letter expressed the Network's collective support for the prompt implementation of the Inter-American Court of Human Rights’ legally-binding decision on the case the Sawhoyamaxa Indigenous Community v. Paraguay (March 29, 2006), requiring the restitution of the Sawhoyamaxa’s original lands. In April and June 2014, ESCR-Net also sent letters to Senators, House Representatives and again the President in support of the bill for the restitution of the Sawhoyamaxa lands. These letters were accompanied by wider advocacy efforts, led by ESCR-Net members, to raise public awareness of the case and support for government action.

The 23-year fight of the Sawhoyamaxa and yesterday’s victory can serve as inspiration to other indigenous communities and human rights organizations in Latin America, as well as in other regions, fighting powerful political and economic actors for the just restitution of traditional lands and other Economic, Social and Cultural Rights.