Mobilized by Movimento dos Atingidos por Barragens (MAB), thousands of people affected by dams came together in 10 states of Brazil to demand a National Rights Policy for People Affected by Dams (PNAB) and to denounce the increase of the price of electric energy, during the International Day of  Struggle Against Dams on March 14th.

MAB denounced moves by the federal government of Brazil to cede to the pressure exerted by speculative capital and right-wing political parties and the massive increase on the price of energy born by the Brazilian population, which is expected to take effect after elections in October.

On the 14th, protest actions took place across the country. In Altamira do Para, the struggle of people affected by the hydro-power plant Belo Monte obliged Norte Energia (the associated company) to commit to addressing demands of those affected. In Paraná, demonstrations compelled the state governor  to agree to the creation of a state policy for the rights of those affected. In Minas Gerais, women affected by dams blocked the circulation route of the trains operated by mining company Vale do Rio Doce and the Federal Government to demand responses to the concerns of affected people.

For more information on the Struggles of March 14th, victories and repression, see here.

MAB has also launched a campaign to request emergency assistance for people affected by the flooding caused by the dams in Rondonia and in Altamira, Pará, and compunded by intense seasonal rains in the northern regions of Brazil . The state of Rondônia faces the worst flooding of its history. There are more than 13,000 people affected in Porto Velho and 20 other districts, including on Rio Madeira where the Jirau and Santo Antonio dams have increased the size of their reservoirs, despite commitments to the contrary. The situation is extremely critical, and some areas are completely under water. The floods have destroyed houses, crops and belongings, and countless livestock and wild animals have either been killed or are stranded. Drinking water is scarce and there is restricted access to food, mobility and health care. MAB is asking for contributions to aid affected people with the distribution of food, clothes, basic hygiene items and mattress, as well as to support mobilizations to demand respect for the rights of people affected by flooding due to the construction of dams. 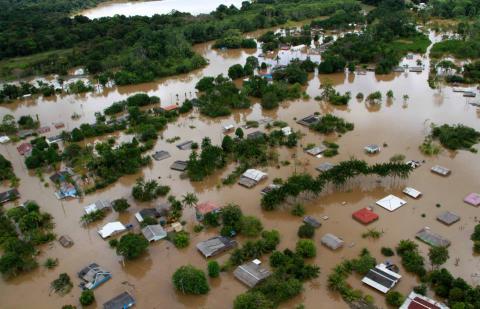 For more information on this campaign, visit http://www.mabnacional.org.br/