In the framework of the 58 session of the Commission on the Status of Women (CSW 58) the Women and ESCR Working Group organized a series of events and meetings gathering several members of the group who where participating at this major UN event that addresses women’s issues.

On Tuesday, 18 March, the Women and ESCR Working Group carried out the side-event on "Women's ESC Rights: A Vital Framework for Fulfilling the MDGS”. The event aimed to raise awareness of how the women's ESCR framework and substantive equality approach can play vital roles in the fulfillment and strengthening of development goals. In particular, it aimed to evaluate collectively what is lacking in terms of women’s rights integration within the current MDGs; identify lessons learnt; and articulate opportunities for better integration of women's ESCR in the new development framework, particularly with respect to addressing substantive inequalities. 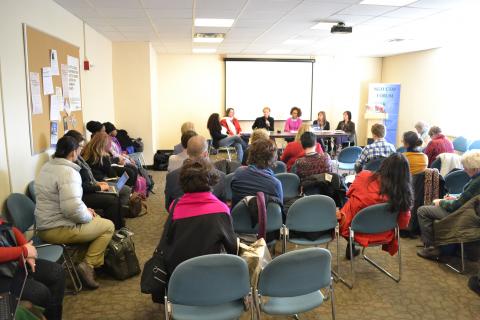 The event was structured as a question and answer discussion where panelists from various parts of the world were able to address through examples how internationally defined goals affect the daily lives of women on the field and jeopardize the full the enjoyment of their rights. It also suggested that the implementation of the MDG agenda at the national level was often carried out by Governments as a checklist agenda, treating people as consumers or statistics instead of as rights holders striving for lives of dignity and well-being. In this regard, the MDGs failed to become a transformative framework for fulfilling the human rights of all. The panelists emphasized that any development goals set within the Post-2015 agenda must include the women’s ESCR perspective and substantive equality framework in both content and indicators. 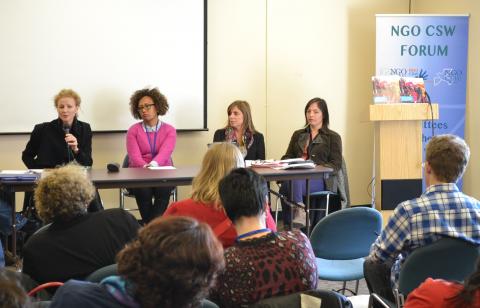 During the event, a factsheet on Women’s ESCR and the MDGs was launched by the Working Group. The factsheet calls for the incorporation of a gender perspective to ensure that human rights obligations are met within the post-2015 development goals. In this document, the ESCR-Net Women and ESCR Working Group identifies how both formal and substantive equality are crucial in addressing the disproportionate impacts of laws, policies and practices experienced by women in different contexts due to various forms of discrimination and structural disadvantage.  The factsheet is available here.

During the CSW, the Working Group also held a strategy meeting with members. In working to address emerging trends impacting women’s rights and the potential added value of the Working Group, members emphasized that the Group, via its regionally diverse membership, can play a decisive role in disseminating solid information to the national level on trends and global negotiations while supporting national-level advocacy for women’s rights.  Members also reiterated that the Working Group is in an excellent position to facilitate connections between women’s groups, making each other aware of the expertise of the members.  Finally, members expressed support for  strategic and learning exchanges between members on economic policies, legal frameworks (at different levels) and strategies to demand women’s ESCR as key activities that the Working Group will carry out in the following months.