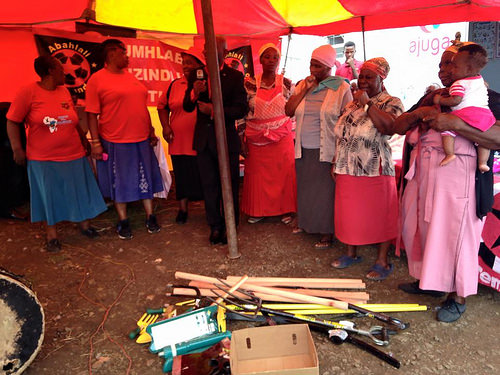 On March 27 Abahlali baseMjondolo, a social movement representing the shack dwellers of South Africa, celebrated their success in securing the installation of electricity in the Siyanda VN Naik settlement of the province of KwaZulu-Natal. This has followed a long struggle by the Siyanda community, which has lived for years without access to essential services such as water and sanitation and electricity. According to Abahlali, the residents of Siyanda began to mobilize in 2005 to claim the right to essential services, and sustained resistance from government officials who refused to establish said services because they claimed that the settlements were only temporary.

“The installation of electricity in the Siyanda settlement is a major achievement,” said Abahlali baseMjondolo in a recent press release. “Our movement will be celebrating after years of our children, men and women were being killed and maimed in fires as a result of the city’s failure to electrify shack settlements.” Spokespeople for the campaign have alleged that several of their settlements have systematically been denied access to essential services in reprisal for their activities to confront and oppose members of the governing party. Reportedly, the policy of denying electricity to shack dwellers is being reviewed in the provincial capital of Durban, and that the city will soon initiate a pilot project in response.

Siyanda also the sixth year anniversary of having collectively joined Abahlali baseMjondolo Movement, in the lead-up to the tenth anniversary of the national shack dweller movement which will take place in the coming months.

In other news, Abahlali also reported that, following the assassination of the movement’s chairperson in KwaNdengezi, Thuli Ndlovu, in September 2014, two local councilors were arrested and subsequently refused bail after being identified by several residents of the settlement as the perpetrators of the crime. Reportedly they have been compelled to appear in the Pinetown magistrate court to face charges for the murder.

This recent measure by the South African authorities followed an urgent action appeal that ESCR-Net issued in December in response to attacks against Ms. Ndlovu and several other Abahlali leaders in an apparent response for their activities to defend and promote the human rights of people living in the shacks of South Africa.