More than 150 delegates of the European Anti-Poverty Network (EAPN), representing 31 National Networks and 18 European Organizations, took the opportunity of EAPN's Strategic Congress and General Assembly to address a final declaration to the EU Heads of States and Governments.

EAPN representatives meeting a day before the Greek referendum harshly criticized the European Union and the IMF for their failed approach to creating growth and prosperity in Europe. “Continuing the outdated and dangerous austerity approach means stripping a country of its most valuable assets: human capital and leaving people in dire poverty.  Poverty and social exclusion have rendered one fourth of Europe’s population without rights,” said President Sérgio Aires, referring to the more than 120 million people in Europe living in or being at risk of poverty. “If the European decision-makers think that people are going to take this any longer, they are mistaken as the Greek vote clearly shows,” added Mr. Aires 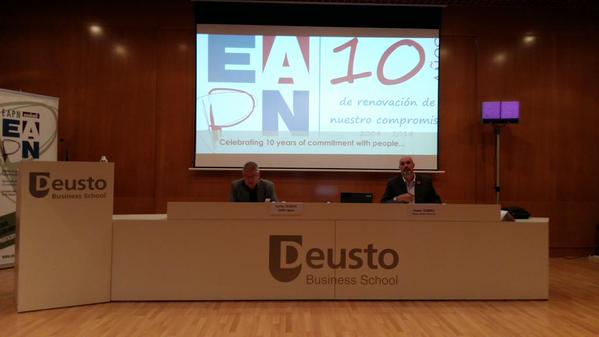 The EAPN event was attended by regional and local political leaders including the mayor of Bilbao, Juan Maria Aburto, who said that “poverty is amongst the most serious problems we face. A civilized society can neither remain silent on injustice and inequalities, nor leave anyone behind. Poverty is unsustainable and intolerable.”

In their 2015 final declaration delegates referred not only to the problem of poverty as a major scourge, but also expressed their full solidarity with the people of Greece and those countries, particularly affected by the austerity programs imposed by the so-called Troika.

"Whereas the continuing austerity policy force more and more people into poverty, the actions of the EU and IMF are putting the lives of people in Greece at risk – we need to re-assert the role of the European Union as a democratic and social project.”

Delegates condemned those EU policies, supported by international lenders, which prioritize those financial interests that benefit very few, over the interests of people and people’s well- being. Concretely, they called for the release of funds to support essential services and incomes and boost employment in Greece and asked to recognize the need for a substantial debt reduction if not debt relief, immediately.

In their final declaration, delegates also expressed their mounting concern over the humanitarian crisis faced by involuntary migrants and asylum seekers at the borders of the EU.

“Whereas an estimated 22,000 migrants have died in the Mediterranean between 2000 and 2014 on their fatal journey to Europe”, EAPN members called on the EU to respond speedily and adequately to the humanitarian crisis of involuntary migration.“This is the time when the EU must show that it is serious about its founding principles of solidarity, respect of democracy and Human Rights”,underlined Sérgio Aires, President of EAPN.

EAPN delegates felt heartened by the support and solidarity that the people on the ground have been showing for the asylum seekers and involuntary migrants when and where they arrive in Europe. “They are practicing a humanity that should be a guide for all of us,” underlined Mr. Aires and continued, “It is the people of Lampedusa, who like to many other communities in the Mediterranean have helped and supported the people, who barely survived the journey. I am pleased to see that the idea has taken hold here that such humanity deserves nothing less than the Nobel Peace Prize.”

The event was a key moment for EAPN members, EAPN national networks and European Organizations member of EAPN, to build together EAPN’s new Strategic Plan and elect its new board.