ESCR-Net engages in international meetings on human rights to water, sanitation and housing in Detroit

ESCR-Net participated in strategy meetings in Detroit, Michigan, related to the ongoing denial of human rights to water, sanitation and housing to thousands of residents in the former industrial capital of the USA. The gathering was coordinated by those at the front of the grassroots struggle for justice—Michigan Welfare Rights Organization (MWRO) and the Detroit People's Water Board Coalition (PWB)—together with Alice Jennings (lead counsel in the case challenging water shutoffs), UUSC, and other grassroots groups and allies. Bret Thiele, Co-Executive Director of the Global Initiative for Economic, Social and Cultural Rights (GI-ESCR), discussed the joint amicus submission of the ESCR-Net Strategic Litigation working Group in the legal case challenging water shutoffs (discussed below). In his comments, Bret stressed, “Litigation must complement broader social advocacy and legal strategies must be informed by and indeed driven by grassroots social movements.”  He also emphasized, “Regardless of what the authorities might suggest, we do have a human right to water. Rights are not given by the US through the ratification of a treaty, nor are the given by the UN; human rights are inherent in all of us as human beings.  Therefore, the issue isn’t whether or not we have a right to water, but rather why that right is being violated with impunity.”  ESCR-Net Members, including GI-ESCR and the Program on Human Rights and the Global Economy (PGHRE) at Northeastern University School of Law engaged in the International Legal and Legislative Summit on Water Affordability, Sanitation and Housing on 29 May 2015, while close to 200 grassroots leaders and human rights advocates, including Kairos Center for Religions, Rights, and Social Justice/Poverty Initiative, joined the International Social Movements Gathering on Water and Affordable Housing on 30-31 May.  Maureen Taylor, State Chair of MWRO, stressed the ongoing struggle for justice in the face of systemic human rights violations but emphasized the need to strategically unite struggles across the country and globally. 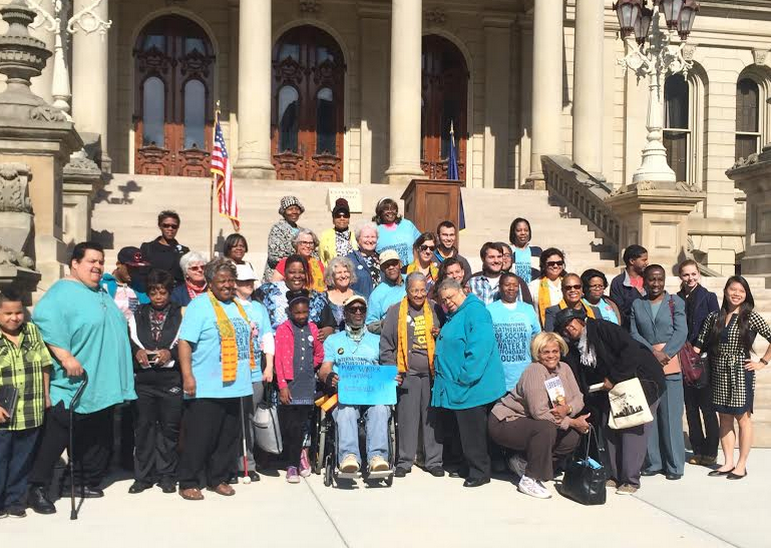 Background on Water Shutoffs and Property Tax Foreclosures in Detroit

On 18 July 2013, the City of Detroit filed for Chapter Nine Bankruptcy, the largest municipal bankruptcy in US history.  In March 2013, Detroit had been turned over to a state-appointed emergency manager, with almost unlimited power to negotiate the city’s future.  Perhaps most disturbing have been widespread and ongoing water and sewer disconnections, affecting some 30,000 households in 2014.  These disconnections have shocked the international community, prompting the visit and statement of two United Nations Special Rapporteurs focused on the right to housing and the right to water and sanitation respectively in October 2014.  In response to their critiques, Detroit’s emergency manager simply insisted that somebody had to pay for the pumping and treatment of water.  This “somebody” has unfortunately meant ordinary people, with particular impact on elderly residents, persons with disabilities, and low-income residents, instead of corporations that continue to enjoy tax subsidies, like Marathon Petroleum, which uses millions of gallons of water to refine tar sands (close to 30,000 barrels of oil a day) yet received a $175 million tax abatement in 2007.  Notably, Michigan residents had voted down the state’s emergency manager law in a 2012 referendum, only to have the state legislature and governor pass a new and aggressive emergency manager law (Public Act 436) weeks later, allowing the state to usurp democratic governance, local ordinances, and union contracts while selling public assets.

Water and sewer disconnections are a moral outrage and human rights violation anywhere; they are particularly appalling amid the wealth of the United States and in a city surrounded by 20 percent of the world’s fresh surface water. Forty percent of Detroit residents live below the official poverty line, and over 80 percent of the population is African American. By 2013, the total population had shrunk to under 700,000, less than half of its size a few decades earlier, with technology and outsourcing eliminated tens of thousands of jobs in the auto industry. Over the past few months, overdue water bills have been attached to property taxes, and thousands are facing tax foreclosure. In addition, Child Protective Services is removing children from their families in homes that have faced water disconnections, instead of providing financial assistance to allow reconnection or alternative living arrangements. 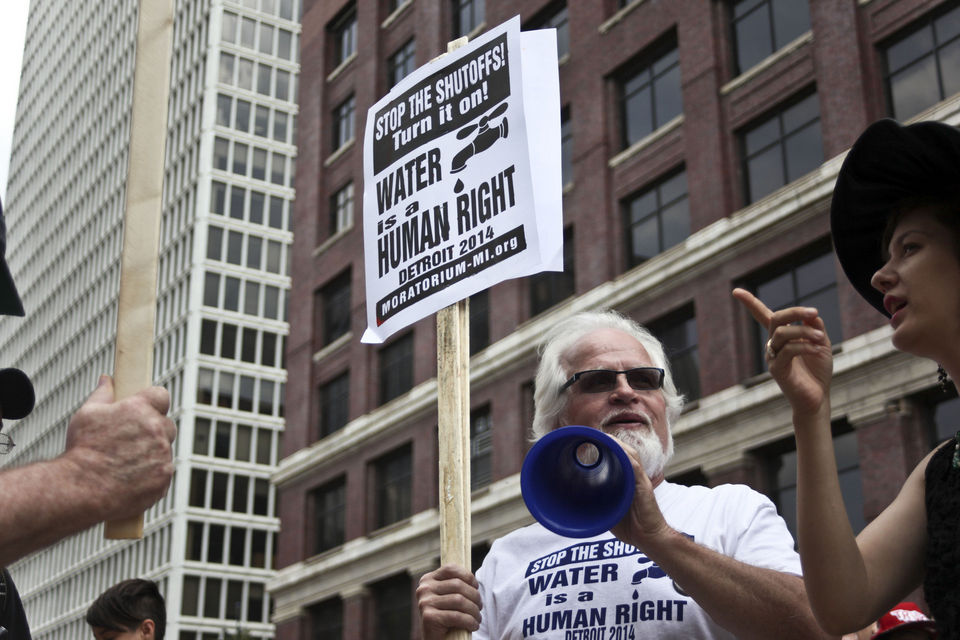 A grassroots struggle has resisted shutoffs, run water hoses from home-to-home, created water brigades and resistance committees, protected children from unjust removal by Child Protective Services, worked with economists to create alternative water affordability plans and with lawyers to advance legal cases, engaged with the UN and international media, raised awareness through the creation of songs and poetry, and consistently raised vital questions of their society, claiming human rights as the core of a just future. In July 2014, the “Homrich 9,” including Marian Kramer of MWRO and the Highland Park Human Rights Coalition, were arrested and face misdemeanour charges for blocking trucks from leaving the gates of the Homrich Corporation. Homrich was given a two-year, $5.5 million contract to execute water disconnections on behalf of the Detroit Water and Sewer Department, which is advised by the French transnational corporation Veolia. Marian declared, “You turn it off, we’re going to turn it back on… Water is a human right. You can only survive three days without water.” 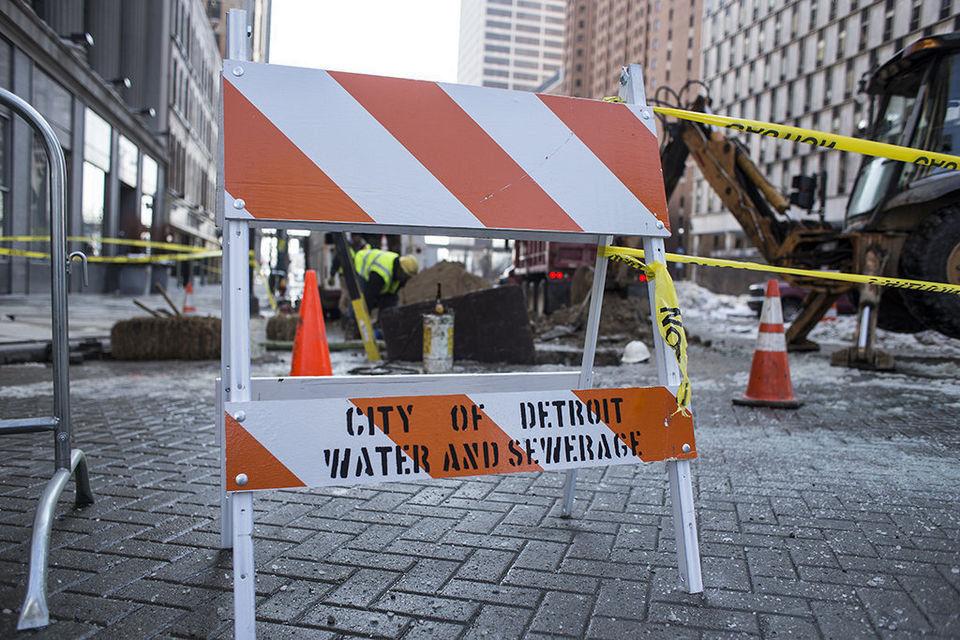 In February 2015,ESCR-Net submitted an amicus curiae brief in support of the Plaintiffs-Appellants. The case challenges the decision of the City of Detroit to disconnect approximately 30,000 households of low-income residents from municipal water and sewer service, leaving them without access to clean water and sanitation. These disconnections have continued since the legal complaint was filed in August 2014. The objectives of the brief were to present the Court with international and comparative material in order to highlight the fact that the US is bound by certain international human rights obligations, that such obligations extend to all levels of the State (including the City of Detroit), and that domestic law must be interpreted consistently with international law. Further, while the US does not currently recognize a human right to water (in contrast with the international community), the brief confirmed that denying access to water is likely to constitute a breach of many human rights, not only the right to water. A secondary purpose of the amicus brief was – through widespread dissemination – to assist other lawyers and advocates facing similar problems to develop legal arguments relating to water disconnections, through the reference to relevant international and comparative material, the framing of arguments, and the sharing of legal and implementation tactics used successfully in other jurisdictions. The brief was a joint project of the members of ESCR-Net’s Strategic Litigation Working Group, including: Center for the Study of Law, Justice and Society (Dejusticia); GI-ESCR; the Social Rights Advocacy Centre (SRAC); and the Socio-Economic Rights Institute of South Africa (SERI); with support from PHRGE . The brief was accepted by the presiding judge on 17 February 2015, but two requests by the Plaintiffs-Applicants for expedited hearings have thus far gone unanswered by the judge, Hon. Bernard Friedman, of the United States District Court, Eastern District of Michigan, Southern District, and the timing for resolution of the case remains uncertain.  Yet this legal case remains one tactic in wider struggle to advance human rights for the residents of Detroit and ultimately for all people everywhere.