In the past week, several organizational members of ESCR-Net denounced the killing of indigenous leader Emerito Samarca, along with two other individuals, on September 1st in Lianga, Surigao del Sur, Mindanao, Philippines. Emerito Samarca was a prominent leader of the indigenous Lumad group and director of ALCADEV (Alternative Learning Center for Agricultural and Livelihood Development). Several ESCR-Net members had met Mr. Samarca at the 2015 International People’s Conference on Mining, whose murder was condemned by the National Fisheries Solidarity Organization (NAFSO) of Sri Lanka, Defend Job, Philippines, Front Line Defenders and mines, minerals and PEOPLE, among others. 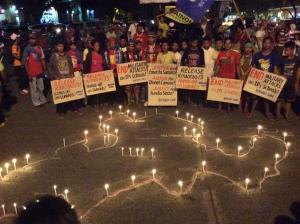 Reportedly, at 4:00am on the morning of September 1, members of the Magahat paramilitary group ordered hundreds of residents out of their homes, following the burning of the community co-op the previous day, in an offensive that resulted in the deaths of Emerito Samarca, tribal leader Dionel Campos and his cousin Bello Sinzo.

This incident is highlighted as perhaps the most brutal in a series of attacks against indigenous persons in Mindanao, with the majority of atrocities being perpetrated against anti-mining activists and Lumad leaders, allegedly by paramilitary or state security forces. The administration of the current president of the Philippines, B.S. Aquino, has been marred by allegations of human rights abuses against indigenous groups and environmental activists. These include the mass displacement of the Lumad peoples, occupation of schools and destruction of property, and widespread impunity and harassment by paramilitary and state forces.

The Government of the Philippines is party to the International Covenant on Civil and Political Right which requires states to respect the right to life, refrain from the use of torture and interference with their citizen’s right to home and property, and the right of free expression. Similarly, the Philippine Government has ratified the International Covenant on Economic, Social and Cultural Rights which recognizes the right of everyone to an adequate standard of living and the right to education. These obligations are in line with the International Convention on the Elimination of All Forms of Racial Discrimination, which the Philippines is also a party, which forbids discrimination on the grounds of race, color or ethnic origin. Furthermore the Declaration on Indigenous Peoples holds that indigenous peoples must not be forcibly removed from their lands, have the right to the conservation and protection of the environment and have the right to be consulted prior to any approval of projects affecting their territories. Finally, the Declaration on Human Rights Defenders protects human rights defenders in the context of their work, a duty that the Philippines is also obligated to uphold.

ESCR-Net members expressed concern that Mr. Samarca may have been killed in reprisal for his work to defend and protect the human rights of Lumad communities in Mindanao, an area considered to be the ‘mining capital’ of the Philippines, with multiple natural resource concessions and many multinational mining companies present.  It is also a highly militarized area, with more than 60 per cent of the country’s Armed Forces combat troops deployed to these mine-affected areas to quell the social conflict that has periodically manifested there. ESCR-Net members have called on the Government of the Philippines to promptly ensure justice for the killing of Emerito Samarca, Dionel Campos and Bello Sinzo; an end to the forced evacuations of indigenous peoples; disbandment of paramilitary forces; and withdrawal of military personnel from Mindenao. To take action in this case, please visit an urgent appeal issued by Front Line Defenders, here.