The European Roma Rights Centre is ready to sue segregationists across Europe and has launched an online campaign to combat school segregation. A shocking map reveals the extent of segregated schools.

“From the very first day of the school year, when all the pupils line up in rows of two-by-two for the first day of school ceremony, the Roma children were put aside into their own group. A Roma child held the hand of another Roma child, without the students mixing. We as children were not able to understand this back then, but our parents did notice the segregation.” 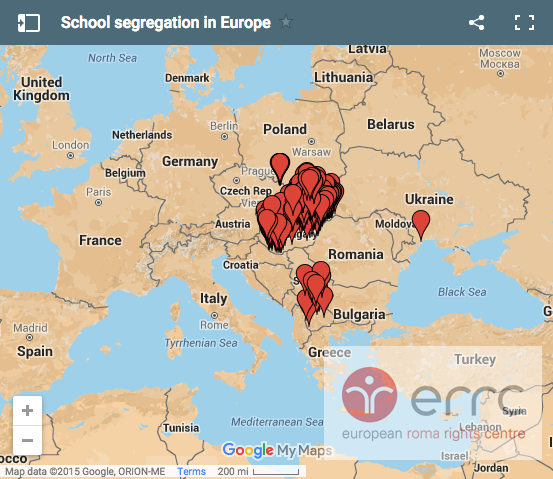 This is just one of the hundreds of stories ERRC and its partners have heard.

Segregated education takes many forms. Roma pupils are often enrolled in Roma-only schools or segregated in Roma-only classes. But in some countries the authorities go beyond this in order to exclude Roma from mainstream education altogether. In Central and Eastern Europe, misdiagnosis of Roma children is a common practice. Upon reaching school age, children are evaluated, and most Roma children are diverted towards special education for children with learning disabilities.

Nobody knows how many children’s chances are ruined by segregation in European schools. States, including member states of the European Union, refuse to collect data, and so the segregating practices remain concealed. The European Roma Rights Centre has launched a campaign to reveal what governments try to hide.

While the Racial Equality Directive expressly forbids segregation in education, it persists in many member states of the European Union. The European Commission has already initiated infringement proceedings against several member states, who may soon find themselves accused of racial segregation in the Court of Justice of the EU. Infringement proceedings against the Czech Republic, in September 2014, have hopefully started a domino effect, with proceedings also initiated against Slovakia in April this year. Hungary looks likely to be next.

School segregation is not only present in the EU member states but in all candidate countries as well.

“School segregation is not merely a Roma issue. It must concern the majority society as well,” says ERRC Executive Director András Ujlaky. “A child educated in an inclusive school can provide three times more to the economy than the costs of inclusive education. School segregation in not only unjust, it is also unreasonable.”

The ERRC has published the above map of known segregating schools in Europe and urges everyone to report cases which have not yet gone public. “We call all NGOs, parents, and students to report cases around Europe. The ERRC will study each case and take the necessary steps to stop segregation of Romani students,” says Adam Weiss, Legal Director of ERRC.