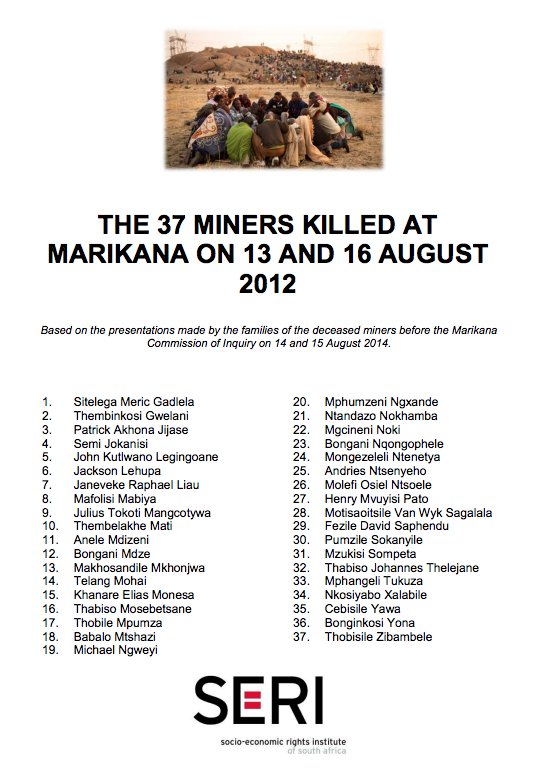 The Socio-Economic Rights Institute of South Africa (SERI) and the Legal Resources Centre (LRC) represent the families of the 37 mineworkers killed at Marikana on 13 and 16 August 2012.

On May  26, they wrote to President Jacob Zuma expressing concern that the report of the Marikana Commission has not yet been publically released, despite the clear public interest in it being promptly made available. SERI is aware of the announcement made by the President during his budget vote speech in Parliament yesterday that the report will be released before the end of June.

This has not been communicated to SERI and LRC's clients, and a letter sent on their behalf on 31 March has received no response. The families consider the more than seven weeks since the report was handed to the President reasonable time to consider it, and have requested that the President release the report by 1 June 2015.

On May 27 SERI and LRC also wrote to Judge Ian Farlam on the families’ behalf requesting that, in the event that the President refuses to release the report by 1 June, he and his fellow Commissioners release the report. Regulation 15 of the Procedural Regulations establishing the Commission provides that:

No person shall, except in so far as shall be necessary in the execution of the terms of reference of the Commission, publish or furnish any other person with the report  or any interim report of the Commission or a copy or a part thereof or information regarding the consideration of evidence by the Commission for publication before the expiration of a period of 14 days after it has been submitted to the President: provided that the President may authorise publication of any such report before the expiration of that period.

SERI and LRC's clients are aware that the Commission has had the power to release the report to the public for more than five weeks. The clients accept that this has not occurred in order to allow the President a reasonable period of time to consider the report and prepare a response. However they believe this period has now expired and that there is no legitimate reason to delay publication any further. The families request that Judge Farlam make an undertaking that, should the President not release the report by 1 June, he will release it on 2 June, or provide reasons for refusing to do so.

A particular concern of the families is the risk that the dates on which their claims against the State prescribe will arrive before the report has been published. This will obviously hamper them in pursuing these claims, and possibly lead to wasted time and costs in amending pleadings to take account of the contents of the report.

Presentations made by the 37 families of the deceased miners before the Marikana Commission of Inquiry here.