Since the first Preparatory Committee (PrepCom1) last year, Habitat International Coalition (HIC) has been delivering a consistent message of issues and recommendations for the process and content of the “New Habitat Agenda.” UN member states will adopt that global rural and urban development policy at the Third UN Conference on Housing and Sustainable Human Settlements (Habitat III), at Quito, Ecuador, in October 2016. 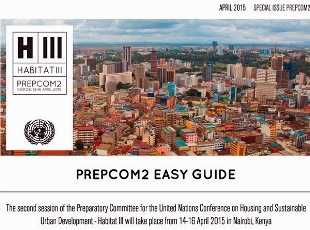 At the second Preparatory Committee (PrepCom2) for Habitat III, at Nairobi, 14–16 April 2016, HIC addressed the essential procedural and substantive issues in a series of side events, summarizing them in the Coalition’s message to the plenary. Former HIC President Davinder Lamba delivered the address, opening with a reminder to those present about HIC’s genesis, formed at the first Habitat Conference in Vancouver in 1976.

Reflecting the past 40 years of promises, the Coalition asserted that Habitat III must preserve three basic principles:

HIC also advised that the Habitat III process and contents must be grounded in commitments that states made 20 years ago in the Habitat II Declaration and Plan of Action (Istanbul, 1996), which called for:

At Istanbul, in 1996, states and governments participating in Habitat II reaffirmed their obligations to uphold the right to adequate housing 61 times in the Habitat II documents. That included their pledge to protect communities from, and redress forced evictions, as well as to combat homelessness. Unfortunately, none of these core commitments is preserved in the UN-Habitat guidelines for preparing Habitat III National Reports. The resulting problems and design flaws in that preparatory process was the subject of a study presented in a separate PrepCom2 workshop organized by HIC and the University College of London’s Development Planning Unit (DPU).

Over the past 20 years, HIC and many other stakeholders have developed and further clarified the human rights and good governance concepts enshrined in Habitat II. HIC has proffered the following key elements to include among the New Habitat Agenda commitments:

The Social production of habitat, or people’s processes to construct and manage housing and the built environment, is often the only choice facing marginalized communities. These processes contribute to providing decent living spaces, strengthening local economies and social development.

The social function of land and property, to the benefit of the common good, prioritizing those with the greatest need.

Surplus- and land-value capture (a.k.a. LVC), which reflects the Habitat II commitment to “innovative instruments that capture gains in land value and recover public investments.”

Accountability for violations of habitat rights and extraterritorial obligations of states and private sector, including: forced evictions; population transfer and settler colonies in occupied territory; land grabbing; and other gross violations which have continued with impunity in every region since Habitat II. Reparation for those affected must also be ensured.

Resilience: Human settlements and their inhabitants must be more resilient, but HIC warned that the focus should be on addressing the root causes of environmental and economic crises and the accountability of responsible parties, rather than heaping all responsibility upon affected communities for cyclical crises and many other kinds of shocks.

Urbanization is not inevitable, HIC insisted. Urban sprawl and the consequent distribution of wealth and poverty are systemic, grounded in deliberate choices and should not be exempt from needed restraint.

Distribution of wealth—and not only growth—is a critical measure of development, and policy and governance success, HIC declared. The Coalition warned that “States and governments would fail in their duties to impoverished citizens if Habitat III did not commit to wealth redistribution.”

HIC reminded that the Habitat II principles and commitments for a better world, although never fully operationalized or evaluated, provide a solid basis for the New Habitat Agenda in 2016.

Former President Lamba, one of HIC’s founding Wisdom Keepers, cautioned that, “this time, we must have comprehensive targets to be continuously monitored nationally and internationally.” He added that the Habitat III process “is also the opportunity to reform UN Habitat, both aligning it with the UN Charter triple purposes (security, development and human rights) and developing formal ongoing consultation mechanisms with civil society organizations.” He concluded by saying that “A New Habitat Agenda that falls short of these standards risks being as neglected as Habitat II’s broken promises, squandering the great efforts and resources invested in this Habitat III process and the 40 preceding years of normative development.”