Human rights defenders at risk: Conclusion from an international mission in Guatemala

The Observatory for the Protection of Human Rights Defenders (comprised by FIDH and OMCT) and UDEFEGUA presented a Mission Report that call on the Guatemalan authorities to put an end to the practice of criminalising human rights defenders in Guatemala and welcome the authorities commitment to implement public policies to protect defenders in collaboration with civil society. 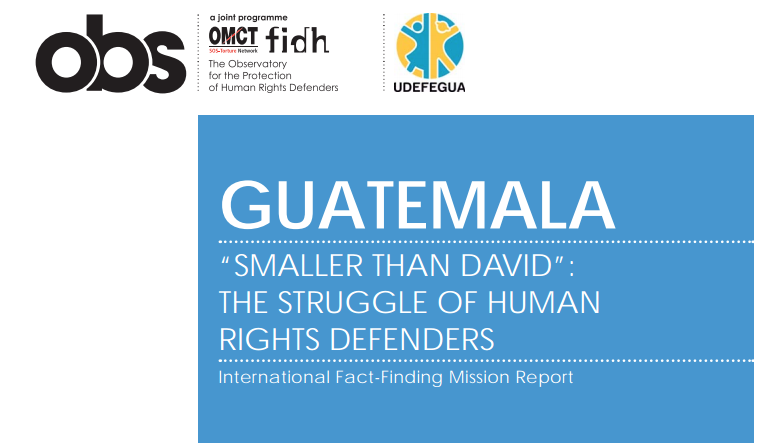 Defending human rights in Guatemala is a high-risk activity due to the increasing number of attacks against defenders. Despite a comprehensive legal and institutional framework, human rights defenders in Guatemala work in extremely vulnerable conditions, which demonstrates the States lack of willingness and capacity to enable a safe and free working environment for defenders.

The Observatory and UDEFEGUA point out that there are insufficient mechanisms to address social conflicts through dialogue and consultation and tackle the structural problems that cause them. On the contrary, the trend is to excessively adopt criminalising measures that only exacerbate the aforementioned social tensions.

Furthermore, in Guatemala there is a tendency to pass strict laws that criminalise the activities of human rights defenders, i.e. Ley de Túmulos (Traffic Circulation and Obstruction of Roads Law) and the Ley de Terrorismo Comercial (Commercial Terrorism Law), that is currently under debate in the Congress of the Republic of Guatemala. Therefore, the competent public authorities, such as the Human Rights Ombudsman and the Congressional Human Rights Commission, should systematically release legal opinions on any draft legislation that could affect human rights.

Lastly, the Observatory and UDEFEGUA are pleased to announce that, during the dialogue with the mission, several country authorities, and primarily the Human Rights Ombudsman, have committed to creating a roundtable for high-level dialogue including Guatemalan civil society in order to implement public policies aiming to protect human rights defenders, as ruled by the Inter-American Court of Human Rights in the case Human Rights Defenders et al. v Guatemala.

The Observatory for the Protection of Human Rights and the UDEFEGUA undertook a fact-finding mission in Guatemala from February 23-27, 2015 to establish a dialogue on the conclusions and recommendations contained in the report published on Monday, February 23, 2015 entitled Más Pequeños que David: the struggle of Human Rights Defenders in Guatemala.

The mission also heard testimonies from representatives of the civil society organisations involved in protecting human rights, and specifically land rights, during meetings held both in Guatemala City and the town of Huehuetenango. It also visited in prison Antonio Rogelio and Saúl Aurelio, two human rights defenders from the community of Santa Cruz Barillas who have been criminalised.

In partnership with the FIDH, OMCT created the Observatory for the Protection of Human Rights Defenders in 1997. This unique collaboration is based on the complementarity of each organisation’s approach and is based on their respective NGO networks. In parallel, many meetings on this subject have been held, culminating with Forum 1998, which brought together more than 600 NGOs from 60 countries, just before the adoption of the United Nations’ Declaration on Human Rights Defenders in 1998.

Related to this issue, ESCR-Net) sent a letter to the President of Guatemala, Otto Pérez Molina, to denounce the criminalization of human rights defenders from indigenous communities in the department of Huehuetenango.

The report is available for download in English and Spanish.