The Impact of Drug Policy on Human Rights: The Experience in the Americas

The Mexican Commission for the Defense and Promotion of Human Rights (CMDPDH) has released the joint publication "The Impact of Drug Policy on Human Rights: The Experience in the Americas" together with 17 organizations from 11 countries in the Americas, including ESCR-Net members the Association for Human Rights in Peru (APRODEH), the Center for Legal and Social Studies (CELS), Dejusticia, Conectas and the Uruguayan Institute for Legal and Social Studies (IELSUR). 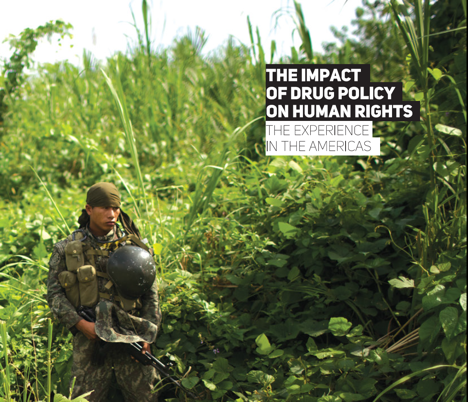 The publication analyzes how the implementation of the "war on drugs" and the international drug control system has overwhelmed criminal justice systems and affected the most vulnerable populations, without even managing to ease the problems of consumption or trafficking in the region.

In Mexico, the war on narcotrafficking has caused 70,000 drug trafficking-related homicides, as well as serious violations to the integrity, liberty and security of millions of people. Since the end of 2006, there has been a significant increase in the use of lethal force and military participation as part of security policies utilized in the war on drugs.

The joint publication offers an in-depth examination of the militarization of law enforcement, the criminalization of consumption, the weakening of due process guarantees, mass incarceration, disproportionate punishments for drug crimes and restrictions on access to health care.

It also features personal testimony about human rights abuses stemming from the prohibitionist drug policies implemented throughout the region. This includes stories like that of Miriam, a Mexican woman who was detained, beaten and raped until she gave a false confession regarding drug possession; Paulino Huamán, who was killed in his home when the Peruvian Armed Forces bombed his village as part of the “War on Drugs”; Anny, a five-year-old Brazilian girl whose parents were forced to buy medication for her on the black market because it contained a derivative of marijuana; and Rocío, a victim of forced displacement in Colombia, who transported small quantities of drugs within the country to feed her three children and ended up imprisoned very far from them, apparently due to an administrative error.

The document emphasizes the increase in the number of women incarcerated for nonviolent drug offenses and the implications this has for them, their families and society as a whole. It addresses the impact of forced crop eradication campaigns, which threaten the livelihood and even the health of some rural communities. And it shows how racism drives marijuana arrests in the United States, making it nearly four times more likely for a black person to be arrested than a white person. In addition, the report highlights the alternative experiences being carried out in Uruguay, Ecuador, Bolivia, and some states of the United States.

The organizations that contributed to this publication present a series of recommendations regarding policies that states should explore in order to lessen violence and improve health-based responses, since prohibitionist measures have failed in their attempts to reduce drug supply and have led to gross human rights violations throughout the Americas. Specific recommendations include the decriminalization of drug consumption and cultivation for personal use, and the development of alternatives to incarceration for people who commit nonviolent drug-related crimes. These proposals have begun to be explored in different parts of the world and show us that change is possible. Alternatives exist.

The publication is available here.