The Price of Steel: Human Rights and Forced Evictions in the POSCO-India Project 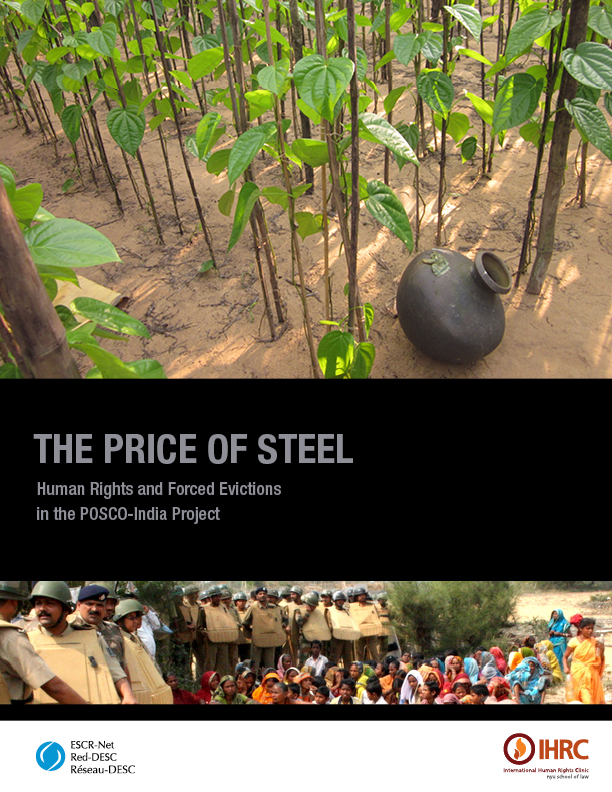 Worth approximately US$12 billion, the POSCO-India project represents the largest single foreign direct investment in India to date, and will require more than 12,000 acres, including approximately 4,000 acres for an integrated steel plant and captive port in an area home to longstanding forest-dwelling communities and a vibrant and sustainable local economy centered around betel leaf cultivation.  For the past eight years, through sustained and peaceful opposition, affected communities—including betel leaf farmers, fisherfolk, and Dalits—have effectively stalled the project and resisted their forcible evictions from lands they have cultivated for generations.

The report finds that India’s attempts to forcibly evict these communities stand in violation of international and domestic law. International legal standards require that India exhaust all feasible alternatives to forced evictions; engage in genuine consultation with project-affected communities; ensure the provision of adequate compensation for affected properties; and follow procedures established by law.  India has systematically failed to live up to each and every one of these standards.

In addition, under India’s Forest Rights Act, the government must secure the consent of forest dwelling communities before diverting forested land.  Affected communities have passed several village resolutions fervently rejecting the diversion of land for the POSCO-India project, resolutions that the Indian government has effectively ignored.

Indian authorities have actively targeted those who speak out against the POSCO-India project with violence and arbitrary arrests and detentions. Local police have barricaded villages, occupied schools, leveled thousands of homes, allegedly fabricated criminal charges against individuals opposing the project, and refused to protect individuals from consistent and sometimes fatal attacks by private actors who are allegedly motivated by the interests of the company and of the State.

As a result of these abuses, for the past eight years, entire communities in the project-affected area have been living under siege and have suffered clear violations of their rights to security of person and freedom of movement; their rights to be free from arbitrary arrest and detention; and their right to be free from discrimination—particularly on the basis of political or other opinions. Living under siege has also resulted in significant disruptions to many villagers’ ability to access health care, schools, markets, and crops, undermining their rights to health, education, work, and food.

Download the Korean language version of the Executive Summary

Read an Open Letter to Naveen Patnaik, Cheif Minister of Odisha, from ESCR-Net and the IHRC sent on July 3, 2013