The United Nations post-2015 development agenda focuses on the creation of goals, targets and indicators to provide a framework to reduce poverty and inequality and promote development across the globe.

The Post2015 Women’s Coalition, a network of national, regional and international women’s rights and social justice organization, for which the Center for Women’s Global Leadership (CWGL), is the Global Coordinator, is working to contribute to the overall post-2015 processes from a feminist perspective.

A departure from the MDGs to the new development goals will be the availability of new technologies in data collection, analysis, and reporting. This “data revolution” has the potential to improve accountability by providing better tools to monitor and implement policies and initiatives. In their call for this “data revolution”, the High Level Panel on the Post-2015 Development Agenda emphasized the importance of “leaving no one behind” and stressed that “data must also enable us to reach the neediest, and find out whether they are receiving essential services.”

At a practical level, how meaningful are these indicators when the process for obtaining this information is flawed? For instance, one of the core indicators measures “Percentage of referred cases of sexual and gender-based violence against women and children that are investigated and sentenced.” Yet the reality is that many women worldwide do not refer or report such cases.

Other practical considerations relate to collecting this information, particularly in countries that do not currently gather this data. What must be done to assist countries currently lacking technical capacity?  What is the best way to coordinate local, national, regional and international institutions and statistical services? 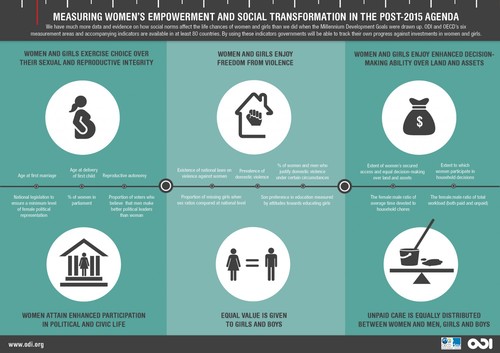