Today, SERI and the History Workshop at the University of the Witwatersrand have launched a website that will allow people to experience a convening on the Marikana Commission of Inquiry, organised by the two organisations earlier this year. 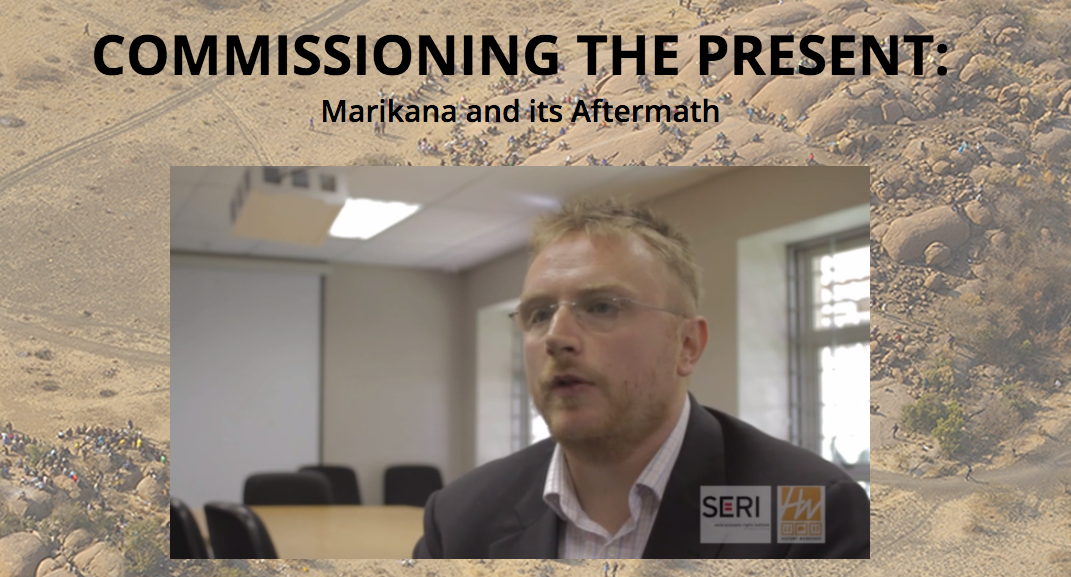 Since 2012, the Marikana Commission of Inquiry has been the site of struggles over the narratives, meanings, and implications of the events at Marikana. Participants in the Commission and scholars came together at a convening entitled “Commissioning the Present: Marikana and its Aftermath” to consider the development of these narratives and stories, and to place both the massacre and the Commission in context. Spaces were opened for discussion and disagreement, and for the development of new political and social narratives.

The website allows people to access and experience the deliberations from the convening, and to reflect on a number of topics, including: The Commission’s Contexts: Social, Economic, Political; The Politics of Platinum; Gender and Lived Experience; Practices of Policing; Popular Politics after Marikana; Political Economies; Land and Custom; Experiencing the Commission: Civil Society Lawyers and Families and Affected Communities; and The Farlam Commission 20 Years after the TRC.

In August 2012, a group of Rock Drill Operators, dissatisfied with their wages, and with the representation available from either of the labour unions with a presence at the Lonmin Marikana Shaft, embarked upon an unprotected strike to push Lonmin for higher wages. The strike, and its attendant protest, soon gained widespread support, and incited a violent response – both from union officials and the police. In the days before 16 August 2012, the striking miners, union officials, Lonmin security guards, and the police themselves, all took a small number of casualties. The striking miners – about 3,000 of them – retreated to the top of a small rocky outcrop just outside the Lonmin shaft compound. There they stayed for four days, demanding that Lonmin management come and address them on their demands.

Lonmin did not come. Instead, the police moved to what they called the “tactical phase” of their operations. They encircled the outcrop with barbed wire, and made to disperse the crowd and arrest the striking miners. As they did so, a group of the miners started to descend the hill, moving toward the Nkaneng informal settlement a few hundred metres away. Travelling slowly at first, they sped up, and raised blankets over their heads, as they were met with teargas and rubber bullets fired to their left flank and to the rear. What happened then was televised the world over. Driven towards the police line, the miners ran around a kraal in order to disperse into Nkaneng through a small gap in the police line. As they approached, the police opened fire. Seventeen of the miners were killed there. Other miners ran away, and sheltered behind a small collection of boulders a couple of hundred metres away. The police gave chase and fired into, and from the top of, the boulders. Another seventeen miners were killed.