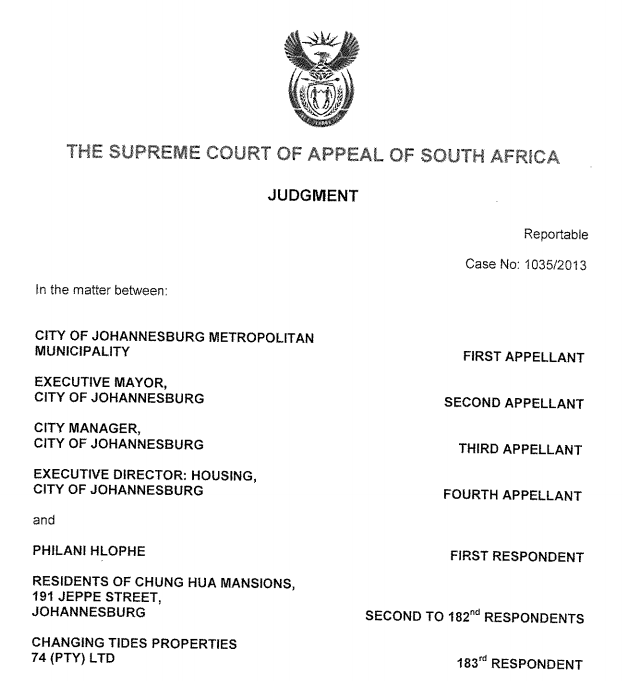 As the Socio Economic Rights Institute (SERI) noted, the South African Supreme Court of Appeal (SCA) confirmed that municipal officials can face contempt of court proceedings if they fail to ensure that municipalities obey court orders.

The SCA was ruling on an appeal by the City of Johannesburg against an order of the Johannesburg High Court made in April 2013. That order directed Mayor Parks Tau, City Manager Trevor Fowler and former City of Johannesburg Director of Housing Thabo Maisela, to take all the steps necessary to provide 180 poor residents with alternative accommodation, failing which they could be sued for contempt. This case was brought to court by the residents of Chung Hua Mansions in Jeppe Street, Johannesburg, after the City missed several court-ordered deadlines to provide the residents with decent shelter. The residents were represented throughout by the SERI Law Clinic.

Acting Judge of Appeal CHG van der Merwe, writing for a unanimous court, held that the fundamental constitutional value of accountability requires municipal officials to see to it that the municipalities they control obey court orders. Judge van der Merwe held that public accountability “is a founding value of the Constitution and central to our Constitutional culture”. In promoting accountability, courts can make a variety of orders, including orders that individual officials discharge their obligations to provide housing for the poor.

Nomzamo Zondo, SERI director of litigation, said: “Today the SCA held that we have the right to expect our public officials to do their jobs diligently, and without delay. The City has repeatedly failed to provide SERI’s clients with decent accommodation, and has left them in appalling conditions in a high-rise inner city building. This is not acceptable. I will be meeting with the City in the next few days to ensure that the residents are promptly given accommodation.”

The residents of Chung Hua Mansions were represented in the appeal by Paul Kennedy SC, and SERI executive director Stuart Wilson.

On 20 December 2012, SERI launched an enforcement application to declare the Executive Mayor, the City Manager and the Director of Housing of the City of Johannesburg, in their respective capacities, constitutionally and statutorily obliged to take all the necessary steps to make sure than the City complies with the June 2012 order granted by Judge Claassen in the Chung Hua eviction case (see here).