During the week of March 16-20, members of the ESCR-Net Women and ESCR Working Group (WG) came together in New York to participate in the 59th Commission on the Status of Women/Beijing+20 (CSW59). Over the course of the week, the WG coordinated a series of events and strategic meetings, conducted video interviews with members, and participated in several joint activities, with 17 WG members present.

On Tuesday, March 17, the Women and ESCR Working Group held a strategy meeting to deepen exchange between members, evaluate and refine current WG actions, and share advocacy lessons related to CSW59. These discussions, during the second week of CSW59, provided an opportunity to assess the openings and challenges presented by the event to advance women's ESCR. Members acknowledged the cost and effort, but also importance, of participation.

CSW59 was particularly significant as it marked the 20th Anniversary of the Beijing Conference. While many had anticipated that this would be a space for engagement and advocacy, there was no opportunity for negotiations between government delegates and women’s groups in NY, before the official political declaration was issued on the first day, instead of at the end of the conference, as had always been the norm. This made it impossible for women's rights advocates to voice their demands or intervene in the text.

On one hand, some member organizations, who had long participated in the CSW, articulated a feeling that the political discourse espoused during the event had become devoid of real content. Participants also expressed concern that the CSW no longer served as a space for spurring advances in women's rights. On the other hand, some groups emphasized that the CSW has been and remains a space where women's rights advocates to come together, learn from other regions, strengthen solidarity and build synergies or joint advocacy. Lastly, participants noted that the CSW provides a unique space for some groups (particularly grassroots groups) to enter into dialogue with representatives of their governments via the country delegations in New York.

CSW59 Side Event at the UN

A CSW59 side event - Advancing Women's ESC Rights: Drawing Lessons from the Implementation of the Beijing Declaration - was facilitated by the Women and ESCR Working Group on Wednesday, March 18, and co-sponsored by the Permanent Mission of Finland to the United Nations. The event was attended by some 130 advocates and delegates. 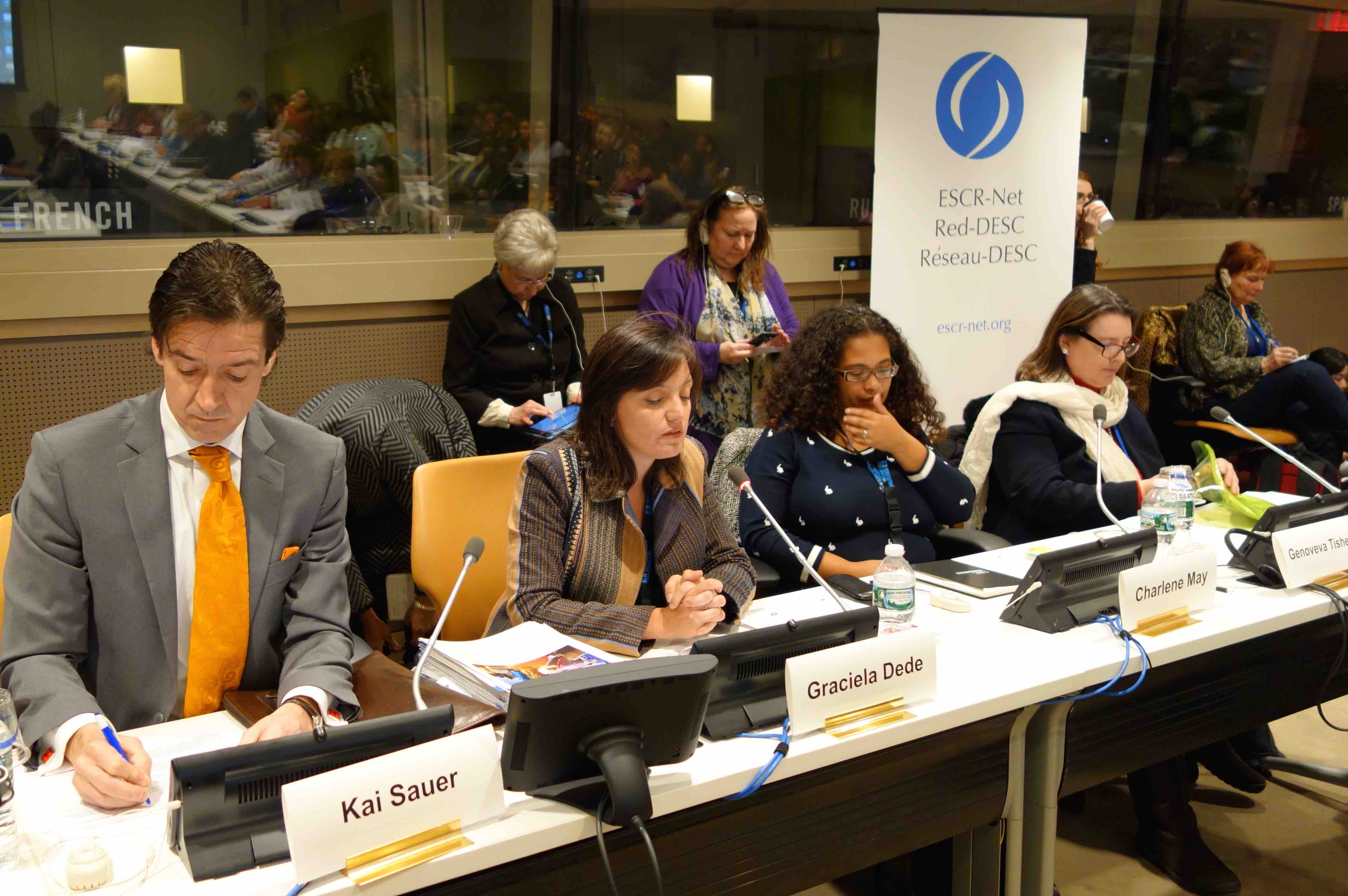 The panelists from each region outlined how the implementation of the Beijing Platform for Action had contributed to women’s enjoyment of their economic, social and cultural rights and their substantive equality. They also focused on how fulfilling the commitments of Beijing has helped to improve normative frameworks and economic policies. At the same time, the panelists drew attention to ongoing gaps and key lessons of the past two decades of efforts to promote women’s ESCR. Finally, they highlighted current international processes (including the Post-2015 and Financing for Development discussions) that serve as strategic opportunities for confronting these weaknesses and demanding the fulfillment of women’s ESCR in the next decade. The event culminated with a reaffirmation of the importance of the Beijing Platform for Action, emphasizing its progressive conception of women’s rights and the components fundamental to obtaining substantive equality.

Reception with Members and Friends

On the Wednesday evening, more than 40 people congregated at the ESCR-Net Secretariat to celebrate and welcome the members of the Working Group on Women and ESCR. Members and friends of the network were able to talk about their work and the realities in their countries while expanding relationships.

On Thursday, March 19, there was a meeting of the Planning Committee for the regional Women and ESCR workshop to be held in Kenya, in June 2015. This workshop is being co-organized by the Kenyan Human Rights Commission, Global Initiative for ESCR, and ESCR-Net. This is one of a series of regional strategy exchanges and learning dialogues focused on  workshops aimed at deepening regional analysis of common challenges, strengthening advocates' ability to utilize international and regional human rights mechanisms, and developing joint strategies to advance women's ESCR.  The Africa regional meeting will have a particular focus on women's human rights related to housing, land and property.

In this meeting, the Planning Committee agreed upon certain criteria for selecting workshop participants, dates for the workshop, and initial elements of the agenda.  Participants included representatives of FIDA-Kenya, Kebetkache, Legal Resources Centre, Kenyan Human Rights Commission, and Global Initiative for ESCR, as well as members of the ESCR-Net Secretariat.