Amnesty International’s new report, titled the The Great Palm Oil Scandal, Abuses Behind Big Brand Names, documents the systematic labor abuses in palm plantations in Indonesia by the world’s biggest palm oil grower, Wilmar. Wilmar’s plantations provide palm oil to many popular food and household companies who are selling food and everyday stables with palm oil tainted by human rights abuses. Over 50% of the products we consume contain palm oil and this report shows how palm oil sourced from Wilmar’s Indonesia plantations are likely to be found in those products. 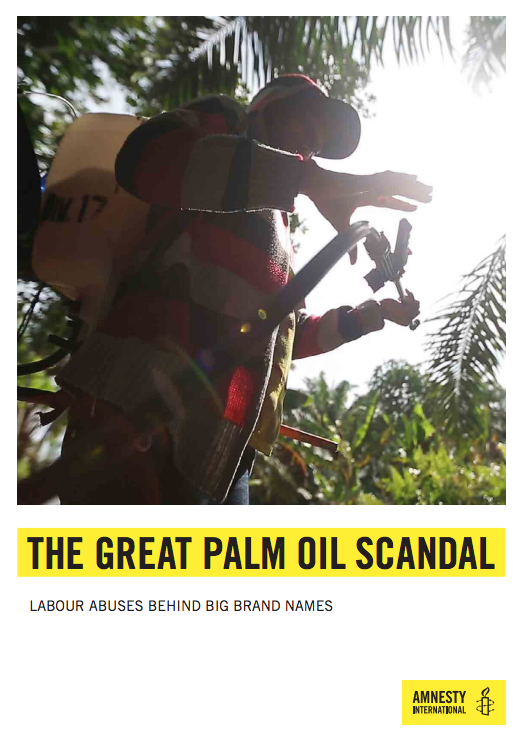 The report is the result of an investigation by Amnesty International, who spoke to 120 workers in palm plantations by two Wilmar subsidiaries and three Wilmar suppliers in Kalimantan and Sumatra in Indonesia. The abuses reported included women forced to work long hours under the threat of having their pay cut, paid below minimum wage and kept in insecure employment without pensions or health insurance. Children as young as eight were also found to be doing hazardous, hard physical work, and sometimes dropping out of school to help their parents on the plantation. Workers suffered severe injuries from paraquat, an acutely toxic chemical still used in the plantations despite being banned in the EU and by Wilmar itself, and worked in hazardous levels of pollution caused by forest fires from August to October 2015 without adequate safety equipment.

Despite involving these abuses, much of this palm oil is marketed as "certified" or "sustainable." The report links some of the world’s biggest brands including: Nestle, Unilever, Proctor & Gamble, Kellogg’s, Reckitt Benkiser, ADM, and Colgate-Palmolive, that source from Wilmar’s plantations and demonstrates serious problems with their supply chain due diligence practices. Three of the five palm growers investigated are certified as producers of "sustainable" palm oil under the Roundtable on Sustainable Palm Oil, revealing the gross discrepancy between these companies’ policies on paper and their practices.

For more information on the human rights abuses found in palm oil production, watch this video by Amensty International about its investigation into Wilmar’s palm plantations.