ESCR-Net is deeply saddened to learn of the violent death of Nilce de Souza Magalhães. The body of “Nicinha,” as she was known by her friends and fellow leaders, was found on Tuesday, June 21, in the lake that had been created by the same Jirau Dam, run by the consortium Energia Sustentável do Brasil (ESBR), which she had been confronting in defence of the rights of her community. 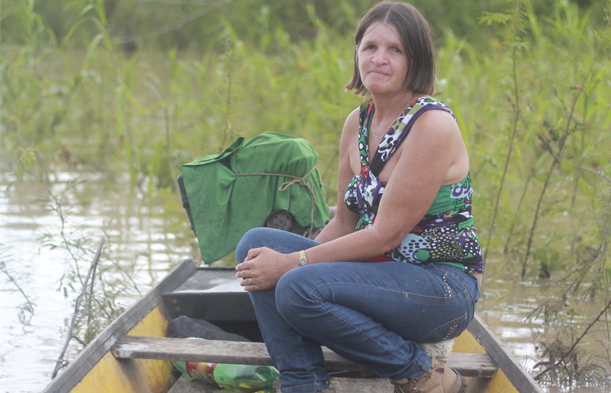 A leader of the Movimento dos Atingidos por Barragems (MAB) in the Brazilian state of Rondônia, Nilce disappeared on January 7, when she went missing from the tent encampment where she had lived for years, without access to clean water or electricity, since her family was displaced by the dam years earlier.

Nilce was a longstanding and well-known grassroots leader working to defend the rights of communities affected by dams, predatory fishing practices and other threats to communities situated in Rondônia, in the heart of the Amazon rainforest, close to the border with Bolivia. Her death, according to many other social movements and human rights advocates around the world, could have been prevented if protection had been provided for her and other human rights defenders, if the perpetrators did not enjoy impunity for their actions and if she had not needed to defend her neighbours and her own family against powerful interests.

However, Nilce did not enjoy adequate protection as a woman human rights defender. Furthermore, the perpetrators of her murder remain free. Brazilian authorities had initially arrested an individual who confessed to her murder, yet the accused reportedly escaped from prison under unexplained circumstances.

ESCR-Net members across more than 70 countries are increasingly aware that communities around the world are facing similar powerful interests that pursue large dam projects, natural resource extraction and speculation which seek profit at the expense of human rights and the environment.

In April, members of ESCR-Net’s Social Movement Working Group observed, with alarm, the rising number of threats and attacks against grassroots leaders and members of social movements that are promoting and defending economic, social and cultural rights. They came together to evaluate multiple incidents affecting its members; these include the ongoing detention of a fisherfolk leader in Pakistan, the assassination of Ogoni indigenous people in Nigeria, the criminalization of human rights activists in the Philippines and Guatemala and the brutal killing of Berta Caceres in Honduras.

Governments, including Brazil, have the primary obligation to respect, protect and fulfill human rights. However, members have observed that many of their governments are increasingly captured by corporate and other private interests instead of being committed to the realization of human rights for all people.  On one hand, this has prompted more communities—like Nilce’s—to get organized, to form or join social movements and to mobilize resistance in defense of human rights for their children and grandchildren. On the other hand, and in response to these demands for basic rights, serious reprisals have led to many losses: of lives, of freedoms and of the ability to live in dignity. Today we observe the loss of another courageous leader who was brutally murdered for her defense of the poor.

While individual grassroots leaders may be forcibly silenced, the strength of their commitment and struggle will not be extinguished. Nilce will live on in the continuing struggle of her community, the Movimento dos Atingidos por Barragems, and in each of us who insist that your struggle is my struggle. Her struggle—our struggle--will be sustained by the power of broad-based solidarity and a profound conviction that systemic change is possible, that it is necessary and that it has, in fact, begun in our common demands for human rights and social justice.