ESCR-Net and FIDH, who have jointly run the Treaty Initiative for two years, have launched a legal resource document for advocates and diplomats involved in the UN process to develop a new treaty to address human rights abuses involving the activities of transnational corporations and other business enterprises. 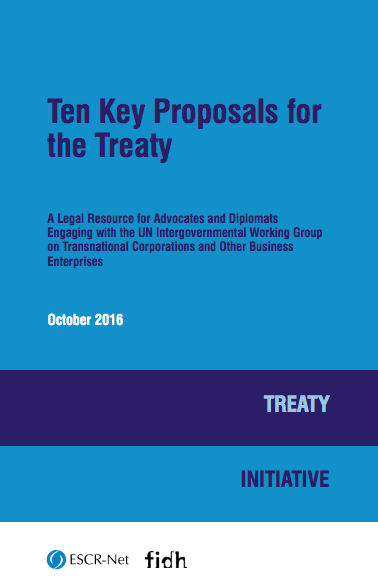 The 'Ten Key Proposals for the Treaty' publication contains proposals relating to critical issues like the primacy of human rights over trade and investment laws, the scope of the treaty (including options for how the treaty could navigate the polarized debates of whether or not to include domestic businesses) and how the treaty might address the international human rights responsibilities of corporations. This timely resource also covers vital issues like participation and access to information, human rights due diligence, extraterritorial obligations corporate criminal liability and the critical issue of access to justice, including the key elements of potential new international mechanism to address human rights abuses involving corporations.

Ten Key Proposals is the designed to directly respond to the concerns of civil society consultations, including representatives of affected communities, who expressed their priorities for the forthcoming UN treaty during 3 day consultations held in Africa, Asia and Latin America, throughout 2015-16, as well as online consultations with other organisations as well during this time.  In total over 150 civil society organisations were consulted in the process of designing the Ten Key Proposals.

A central aspect of the Treaty Initiative has been the facilitation of ongoing interaction between diverse members and legal practitioners, who are members and allies of ESCR-Net and FIDH. To this end, ESCR-Net and FIDH established a Legal Group, experienced in applying international human rights law in the context of corporate human rights abuses, who participated in all consultations and lead in shaping the contents of the Ten Key Proposals. Without the active involvement of the Legal Group, this project would not have been successful.

The combined membership of ESCR-Net and FIDH comprises over 400 human rights organisations, grassroots groups, academic centers and individual advocates, operating in more than half the countries of the world. For over a decade, both networks have been central to calls to strengthen the international legal framework to address corporate human rights abuses based on the experiences of affected communities.  The Ten Key Proposals will support our members everywhere to engage in detailed advocacy discussions with States involved in the treaty making process for several years to come.

The Treaty Initiative emanates directly from the demands of ESCR-Net members expressed at the ESCR-Net Peoples’ Forum on Human Rights and Business (Bangkok, October 2013). Their demands found form in a joint civil society statement that became the first Statement of the Treaty Alliance. The Statement called for the development of an open-ended intergovernmental working group with a mandate to develop an international legally binding instrument to effectively address corporate human rights abuses, and ensure that effective accountability and redress mechanisms are available for affected people. The Statement gained the support of over 1000 signatories, including more than 600 organisations and 400 individual advocates from over 100 countries. In June 2014, the UN Human Rights Council passed Resolution 26/9 which established the United Nations open-ended intergovernmental working group on transnational corporations and other business enterprises with respect to human rights (IGWG), with a mandate to elaborate an international legally binding instrument to regulate, in international human rights law, the activities of transnational corporations and other business enterprises.

Following the passage of Resolution 26/9, ESCR-Net and FIDH established the Treaty Initiative to achieve four objectives: to ensure that members—particularly grassroots groups from affected communities—are able to engage in the UN Treaty-making process; to facilitate the collective development of resource materials by  members for use in their own advocacy; to generate advocacy structures in different regions that support efforts to advance regulation and remedy at all levels; and to support civil society groups in the Treaty Alliance, by producing opportunities to engage in consultations, circulating resources to allies, and encouraging more human rights organisations to engage in domestic, regional and international advocacy. To achieve these objectives ESCR-Net and FIDH have coordinated three-day in-person consultations in the following regions: Asia-Pacific (Chiang Mai, May 2015), Africa and the Middle East (Nairobi, October 2015) and Latin America (Mexico City, May 2016). We also sought written inputs and conducted several online thematic consultations. Altogether, over 150 human rights organisations and grassroots groups have articulated their priorities for the Treaty over the course of this project in 2015-2016.  ESCR-Net and FIDH have also supported the development and maintenance of regional advocacy platforms in Asia-Pacific, Africa and Latin America, as well as at the national level in several countries.

The aim of this legal resource is to support the advocacy efforts of our members and allies to participate in the development of a robust Treaty that responds to their everyday challenges dealing with corporate human rights abuses, and support government officials and other actors seeking to engage with the IGWG in order to develop a Treaty that responds to the needs of those most affected by corporate human rights abuses.