ESCR-Net Members and allies input into role of IACHR in realization of ESCR in D.C.

On January 27, 2016, over twenty civil society organizations from the United States and Canada, including the following ESCR-Net members: Center of Concern, CESR, CIEL, CWGL, DPLF, Kairos/Poverty Initiative, Mining Watch, PHRGE, and Tara Melish, gathered at the headquarters of the Inter-American Commission on Human Rights at Washington, D.C., for the sixth consultation organized by the ESCR-Unit to discuss priorities and next steps for the protection of economic, social and cultural rights (ESCR) in the Americas. 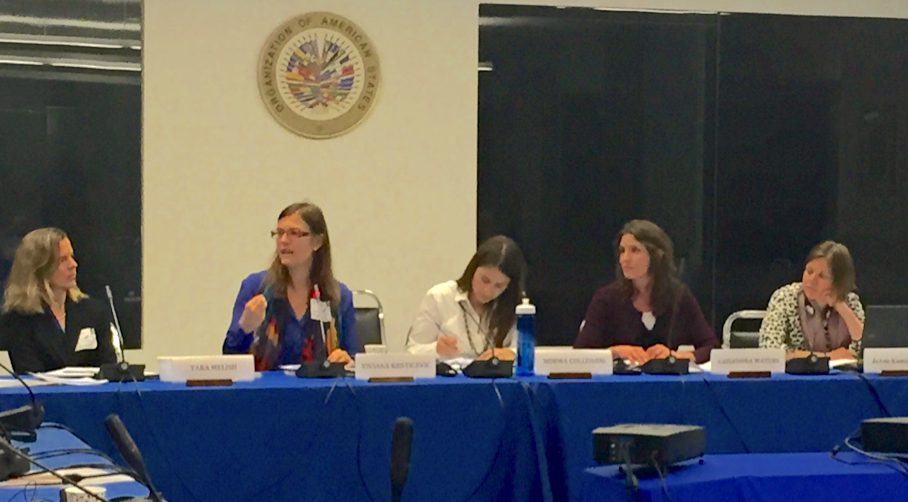 Following consultations with civil society organizations in Argentina, Brazil, Colombia, Mexico, and Paraguay, this sixth consultation tackled a variety of issues, from economic policy and extraterritorial obligations to poverty, structural inequalities and systemic patterns of violations of ESCR.

While attention was given to US and Canadian government policies and private actors beyond their borders, there was also a recognition that grassroots struggles US and Canada—including for rights to water and sanitation in places like Detroit and Flint, Michigan —are not dissimilar to struggles for dignity, well-being and justice throughout the Americas.  Connecting and amplifying these struggles was foregrounded as a powerful potential role for the ESCR Unit and the wider Commission.

Liz Theoharis (Kairos/Poverty Initiative) emphasized: "What would help our work and the realization of ESCR in the United States is for this Commission and Unit to continue to partner with grassroots efforts, amplify to the rest of the world what is going on, including showing that the U.S. is no exception to gross violations of human rights of their own people. Just as importantly we need you to help show that people here take our rights seriously and are fighting for their realization."

The meeting affirmed that the Inter-American Commission is open not only to lawyers and academics but also to grassroots groups and wider human rights advocates.

In their concluding remarks, Tara Melish (Buffalo University) and Viviana Krsticevic (CEJIL) stressed possibilities for moving ahead, including a focus on cases, reports more focused on principles and obligations that are usable by grassroots groups, and the creation of working groups which would report back to the Inter-American Commission.

ESCR-Net, together with the Due Process of Law Foundation (DPLF), appreciated the opportunity to work with the ESCR Unit in organizing this consultation.  In addition to Commissioner Paulo Vannuchi, the head of the ESCR Unit, the presence and remarks of Commissioners James Cavallaro and Esmeralda Arosemena de Troitiño were warmly welcomed.

The ESCR-Unit is still receiving written submissions regarding ESCR violations in the US and Canada. To contact the Unit, please write to Norma Colledani, IACHR Human Rights Specialist, at: NColledani@oas.org.