FIAN, in collaboration with other members, releases the Right to Food and Nutrition Watch 2016

FIAN International, together with several ESCR-Net members as Observatori DESC, Pakistán FisherFolk Forum, People's Health Movement, Dejusticia, Habitat International Coalition and World Oganization Against Torture, released its Right to Food and Nutrition Watch 2016 at the Food and Agriculture Organization (FAO) of the United Nations. Titled “Keeping Seeds in the Peoples’ Hands”, the publication found that seeds and biodiversity are under threat as a result of increasing corporate capture. 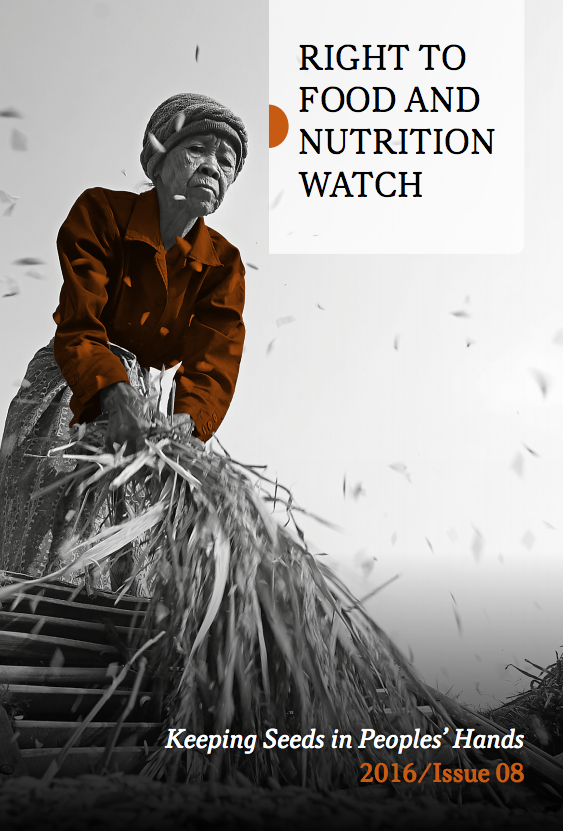 The publication gathered the views of civil society organizations, social movements and scholars all over the world and exposes how business seeks to privatize, monopolize and control seeds by patenting and commodifying them. The imposition of intellectual property rights and patents are putting formerly resilient peasant seed systems at risk and is coming at the expense of peoples’ human rights and the maintenance of biodiversity.

Recent trends, show that corporations are aiming for a tighter grip on genetic resources to reap even larger profits and are driving processes of environmental degradation, climate change, and biodiversity loss, inducing violence, conflicts, evictions, and displacements.

Furthermore, the criminalization of human rights defenders is increasingly associated with environmental struggles and is blurring the line between environmental and human rights struggles. Only in 2015, more than three people were killed every week defending their land, forests and rivers against destructive industries.

The publication calls for states to fulfill their human rights obligations by adopting stronger policies and laws that recognize and protect peasants' rights to save, use, exchange and sell seed. It recommends the establishment of a coordinated 'warning systems' to support victims and activists that are being harassed, criminalized, and imprisoned for defending the commons. It also emphasizes the need for states to prevent corporate capture of public policymaking and influence in international processes.