Under threat: the challenges facing religious minorities in Bangladesh, a new report by Minority Rights Group International, shows a series of violent incidents since 2013 targeting religious minorities by militant groups in Bangladesh. The report draws on published sources, fieldwork by local rapporteurs and first-hand author interviews with a number of activists, lawyers and journalists and aims to provide a fuller picture of the complex challenges facing these communities and the need for a society-wide solution to the insecurity that has plagued Bangladesh. 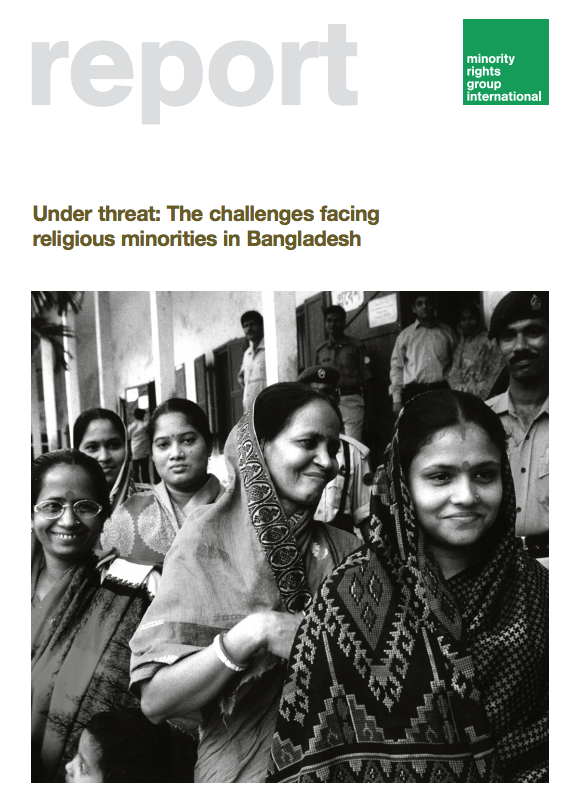 The victims of this new outbreak in targeted attacks and communal violence have included – besides atheists, secular bloggers, liberals and foreigners – many Buddhists, Christians and Hindus as well as Ahmadis and Shi’a Muslims. Some perpetrators of these attacks have claimed affiliation with groups such as Islamic State or al-Qaeda and a number of the attacks have subsequently been claimed by the Islamic State. The Bangladeshi government has denied this claim, attributing the attacks to domestic militant groups.

Minority Rights Group International sees this violence as the latest chapter in a long history of discrimination and segregation against religious minorities, stretching back to the legacy of colonialism, the 1947 Partition and the bloody civil war in 1971 during which the Hindu population in particular was targeted. Despite the promise of independence in 1971 and the passing of a secularist Constitution, since then an increasingly restrictive religious nationalism has sidelined Bangladesh’s minorities within their own country

In many cases, official policies have made religious minority rights more precarious rather than less. For example, the government-sponsored migration of Bengali settlers to the Chittagong Hills since the 1970s has led to conflict and dispossession for indigenous peoples, who are predominantly Buddhist and Christian, as well as Hindu and animist, leaving many displaced from their ancestral land.

Minority Rights Group International has also created an online map that shows the incidences of deadly attacks against religious minorities and other groups. Most recently, Hindu homes and temples were attacked in Eastern Bangladesh injuring over 100 people.