Promoting the Optional Protocol to the ICESCR at the African Commission

In partnership with the Working Group on Economic, Social and Cultural Rights of the African Commission of Human and Peoples' Rights (ACHPR), the NGO Coalition for the Optional Protocol to the International Covenant on Economic, Social and Cultural Rights (OP-ICESCR) coordinated a panel on the role of the OP-ICESCR in advancing equality and human rights for all at the 58th Session of the ACHPR (April 2016). Two significant milestones -  the African Union’sdeclaration of 2016 as the African Year of Human Rights with Special Focus on the Rights of Women, and the 50th anniversary of the adoption of the International Covenant on ESCR – were used to frame the event. 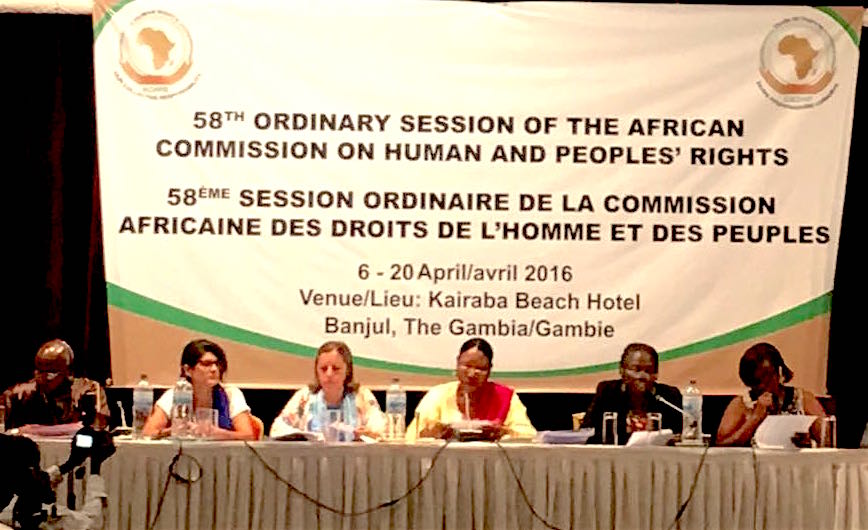 The panel took place on 11 April 2016 during the main session primarily addressing state representatives regarding the vital role of this protocol in advancing equality by enabling people to claim their rights at the international level when these rights are not met at home.

With the support of the Commission’s Working Group on ESCR, the panel included the participation of Commissioners Jasemina King and Maya Fadel, Chairperson and Member of the WG on ESCR at the ACHPR, respectively. Additionally, the panel included two representatives of the NGO Coalition for the OP-ICESCR – Pauline Vata from Hakijamii-Kenya, and Ivahanna Larrosa, Coordinator of the Global Campaign for the Ratification of the OP-ICESCR, who emphasized the importance and the value added of this treaty as complementary to regional instruments.

Commissioner King listed the countries in Africa that have already ratified – Gabon, Niger and Cape Verde – as well as those that have signed the treaty. She called on member states to move forward in ratifying this treaty that allows individuals to present a complaint at the international level in the case of ESCR violations and after all national remedies have been exhausted.

Commissioner Fadel highlighted the importance of providing another tool that enables people to claim their rights, especially in the context of the African Year of Human Rights with Special Focus on the Rights of Women.

Pauline Vata from Hakijamii-Kenya stressed the benefits of ratifying the treaty for states, such as providing avenues for dialogue and learning regarding how to implement these rights at the national level.

Ivahanna Larrosa provided an overview of the campaign in Africa and the rest of the world, stressing how members of the NGO Coalition have been promoting the OP-ICESCR since the process to push for its adoption first began. She also recalled the pivotal role played by African states from the beginning of this process, and how they ensured that the OP-ICESCR did not fall below the standards established by regional mechanisms. Larrosa encouraged ratification of this treaty, stressing the importance of a mechanism that enables rights holders to claim the rights that states committed to protect, promote and fulfill when they became parties to the ICESCR.

A few interesting questions and comments were articulated by audience members: How can states fulfill their obligations in terms of ESCR when there are insufficient resources? What is the relevance of such an international instrument if there is already a regional human rights system in place?

The speakers addressed these questions by clarifying that in assessing the performance of states regarding these rights, the UN Committee on ESCR (CESCR) – the body mandated to monitor compliance with the ICESCR and to receive complaints –  considers the measures taken and the progress towards realization of the rights contained in the ICESCR. In addition, the CESCR is able to provide guidance to states regarding the fulfillment of their obligations under the Covenant, as well as facilitate access to international cooperation and assistance if requested.

The speakers were unequivocal in stating that the ratification of the OP-ICESCR represents an important step forward in ensuring access to justice and overcoming poverty and marginalization.