The three individuals had gone missing on Thursday, June 23, after appearing before Mavoko Law Courts, and were seen detained on the premises of the Administration Police later that day. 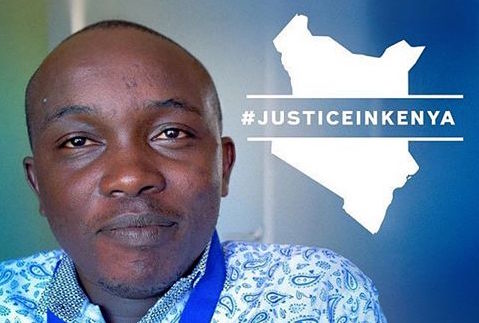 Kimani, who worked as a lawyer with the International Justice Mission (IJM), was representing his client, Josphat Mwendwa to challenge his ongoing harassment by authorities since he lodged a complaint with the Independent Police Oversight Authority (IPOA). The complaint concerned an incident that took place on April 10, 2015 incident in which he was shot by an Administration Police officer during a traffic stop.

Their disappearance triggered initial urgent actions by several Kenyan organizations. The Kenya Human Rights Commission (KHRC) issued a press release issued by the KHRC condemning the enforced disappearance of the three individuals, while a blog post, titled “How Safe Are Human Rights Lawyers In Kenya?” was posted by Kituo Cha Sheria.

On June 30, 2016, the bodies of Willie Kimani, Josphat Mwenda and their driver, Joseph Muiruri, were discovered in a river in Machakos County, reportedly showing signs of torture.

In response to this discovery, several ESCR-Net members quickly undertook action to call for justice for the murdered individuals and full respect for the rights of human rights defenders in Kenya.  In close collaboration with Amnesty International Kenya, the KHRC helped organize, and participated in, protests that emerged by civil society organizations on July 4 to express outrage over the killings, in which FIDA-Kenya and other Kenyan human rights groups also participated.  Meanwhile, the Center for Reproductive Rights launched a petition calling for a prompt and effective investigation, guarantees for the physical and psychological security and integrity of all human rights defenders in Kenya and an end to harassment and intimidation of human rights defenders in Kenya. That petition is still open for signatures, available here.

Multiple ESCR-Net members have noted a troubling trend of increased instances of harassment and violence, including extrajudicial killings, against human rights defenders working in Kenya, and have vowed to continue with their efforts to demand Kenya’s full compliance with human rights standards, including protection for human rights organizations and advocates against violence and other threats.