Voluntary sustainable development goals, representing a new political commitment by States, must be complemented by genuine accountability for compliance with existing human rights obligations. This was the primary message of the NGO Coalition for the Optional Protocol to the International Covenant on Economic, Social and Cultural Rights (OP-ICESCR) and other speakers during the UN side event, “Realizing Economic, Social and Cultural Rights in the Implementation of the 2030 Agenda for Sustainable Development,” on 13 July 2016. 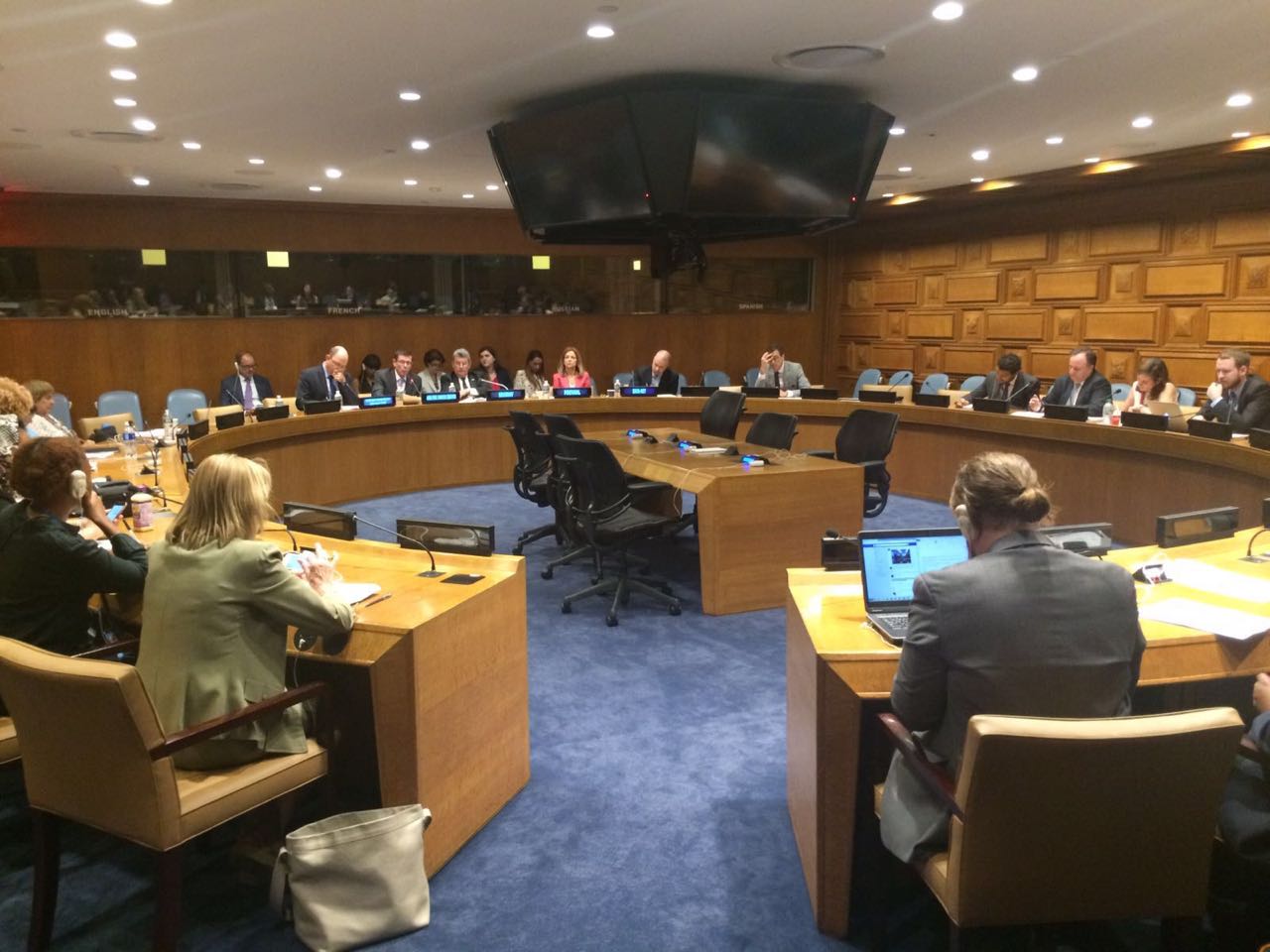 The NGO Coalition, represented by Areli Sandoval (Equipo Pueblo, Mexico) and Chris Grove (ESCR-Net Secretariat), supported the UN side event co-sponsored by the Permanent Missions of Uruguay and Portugal, co-chairs of the Group of Friends of ESCR, with the support of the Office of the High Commissioner for Human Rights (OHCHR) and the participation of the UN Department of Social and Economic Affairs (DESA).

This event occurred alongside the High-Level Thematic Debate on Human Rights of the UN General Assembly, which took note of the 50th anniversary of the International Covenant on Economic, Social and Cultural Rights (ICESCR) and the International Covenant on Civil and Political Rights (ICCPR), as well as the 30th anniversary of the Declaration on the Right to Development.  This event was also situated during first meeting of the United Nations High-level Political Forum on Sustainable Development since the adoption of the UN 2030 Agenda, which will include the voluntary reviews of 22 countries.

The NGO Coalition, in its opening comments, stressed that ratification of the OP-ICESCR—ensuring access to justice at the international level when domestic remedies are not available—represents an important step that all states can take to fulfill SDG #16, namely, to: “Promote peaceful and inclusive societies for sustainable development, provide access to justice for all and build effective, accountable and inclusive institutions at all levels.”

The NGO Coalition—over 300 civil society organizations across more than 70 countries—stressed that the SDGs should be interpreted in accordance with existing and broader obligations to respect, protect and fulfill human rights, which the vast majority of States have long accepted.

As States work to meet these obligations, the UN Committee on ESCR and other treaty bodies have provided valuable guidance to States, including in relation to ICESCR Article 2.1 of the ICESCR.  This article emphasizes that each State Party must undertake “steps, individually and through international assistance and co-operation, especially economic and technical, to the maximum of its available resources, with a view to achieving progressively the full realization of the rights recognized in the present Covenant by all appropriate means...” Article 2.2 then discusses guaranteeing these rights “without discrimination of any kind.”

As Ambassador Mendonça e Moura of Portugal argued, human dignity—the human person—must be the center of development.  If development is not aimed at fulfilling and situated within the economic, social and cultural rights framework, we will never achieve sustainable development.  Ambassador Rosselli of Uruguay stressed that human rights must be the aim of public policy.  In turn, States cannot ensure sustainable development without accountability for their human rights obligations.  Both ambassadors stressed the vital role of civil society in holding government to account, in demanding the realization of their inalienable human rights.   Similar views were echoed in interventions from representatives of Finland, Argentina and Spain.

Of relevance to this event, in February of this year, the Group of Friends collectively intervened in the 54th Session of the UN Commission for Social Development.  They stressed the indivisibility, interdependence and interrelatedness of all human rights and stated: “We warmly welcome the [2030] Agenda and wish to highlight the need to implement it in accordance with international human rights law, particularly the International Covenant on Economic, Social and Cultural Rights. A human rights perspective will help us achieve the ambitious objective of leaving no one behind and ensuring the equal dignity of all, without discrimination of any kind.”

Various panelists emphasized the long journey from the adoption of the Universal Declaration of Human Rights (UDHR) in 1948—following the devastation of a global economic crisis revealing immense inequality and the destruction of World War II—to the entry into force of the OP-ICESCR on 5 May 2013.  Both the ICESCR and ICCPR have now each been ratified by more than 160 countries. By adopting the OP-ICESCR, the General Assembly took a crucial step towards realizing the promise of the UDHR and 1993 World Conference on Human Rights, by creating a mechanism at the international level for individuals or groups of individuals to raise complaints regarding violations of their ESCR.  Significantly, this has been possible for violations of civil and political rights under the ICCPR, as well as under other human rights treaties, when remedies are not available at the domestic level.  All rights, recognized in 1948, now have the possibility of a remedy at the international level.

However, this requires that States ratify the OP-ICESCR, ensuring access to justice when human rights are not respected, protected or fulfilled.  As Areli Sandoval stressed, civil society participation in creating national implementation plans, as well as monitoring their compliance, is vital to sustainable development.  Similarly, ratification of the OP-ICESCR is crucial step if states are truly committed to sustainable development aimed at the realization of human rights for all people.