ActionAid’s new briefing Making tax work for women’s rights unpacks the ways in which tax systems adversely affect women, and in particular, poor women. The briefing draws on the work done by ActionAid on both tax justice and women’s rights to show how the means in which taxes are raised and spent affect men and women differently. 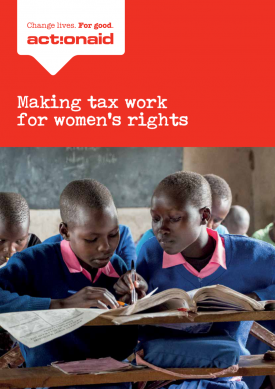 Focusing on the need to maximize tax revenue to fund public services, the report shows how corporate tax breaks and loopholes in the international tax system are draining potential funds for public services in many countries. If taxes for companies were stronger, the income could be used to increase funding for women’s rights and empowerment programs.

The report also explains how women are in higher need of public services and therefore affected more drastically by this lack of tax income. Women need quality, gender-responsive public services because women make up a majority of people living in poverty, do the vast majority of unpaid care work and require specific services for the fulfilment of their sexual and reproductive health and rights.

If tax revenues are maximized and spent on these public services, they can help end gender inequality. ActionAid asserts that this requires progressive taxes, where those with higher incomes pay a higher proportion of their income than the poor. Given that women make up the greater proportion of poor people, this should have an effect on reducing their economic inequality as well.

Countries should carry out tax impact assessments to identify the gendered effects of their tax systems, with particular attention to how their taxes affect poor women, and end feature of the taxes that discriminate against women and establish gender-responsive budgeting.