The African Court on Human and Peoples Rights, at its 45th session on 26 May 2017 in Arusha, has ruled in favor of the Ogiek indigenous peoples in their claim against the Kenyan government, for consistent violations and denial of their land rights. The Court held, following an eight-year process, that the Kenyan government violated seven articles of the African Charter.

This is the first time the African Court, in operation since 2006, has ruled on an indigenous peoples’ rights case and is by far the largest ever case brought before the Court. It was originally lodged with the African Commission on Human and Peoples’ Rights, but was referred for the first time in history to the Court on the basis that it evidences grave, mass human rights violations. ESCR-Net members Minority Rights Group International (MRG), Ogiek Peoples’ Development Program (OPDP) and CEMIRIDE were the three original Complainants before the African Commission. 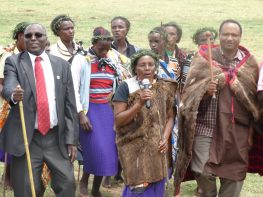 The Ogiek, 35,000 of whom are the victims in this landmark case, live in the Mau Forest Complex in the Rift Valley of Kenya. They are one of the last remaining forest-dwelling communities and among the most marginalised indigenous peoples in Kenya. They allege eight violations of their rights to life, property, natural resources, development, religion and culture by the Kenyan government under the African Charter on Human and Peoples’ Rights, to which Kenya is a party.

"For the Ogiek, this is history in the making. The issue of Ogiek land rights has finally been heard and the case has empowered them to feel relevant. I know that the case also gives hope to other indigenous peoples: it has made the issues seem real," said Daniel Kobei, Executive Director of OPDP, upon learning of the decision of the regional court.

‘This case is of fundamental importance for indigenous peoples in Africa, and particularly in the context of the continent-wide conflicts we are seeing between communities, sparked by pressures over land and resources,‘ says Lucy Claridge, MRG's Legal Director. "Crucially the Court has recognised that the Ogiek - and therefore many other indigenous peoples in Africa - have a leading role to play as guardians of local ecosystems, and in conserving and protecting land and natural resources, including the Mau Forest," she added.

In March 2013, the African Court issued a provisional measures order requiring the Kenyan government to stop land transactions in the Mau Forest and refrain from taking any action which would harm the case, until it had reached a decision. This order unfortunately has not been respected.

For decades the Ogiek have been routinely subjected to arbitrary forced evictions from their ancestral land in the Mau Forest by the government, without consultation or compensation. This has had a detrimental impact on the pursuit of their traditional lifestyle, religious and cultural life, access to natural resources and their very existence as an indigenous people, in violation of the human rights framework. The Ogiek have a spiritual, emotional and economic attachment to the forest. They rely on it for food, shelter and identity.