Collective guidance for security and protection for human rights defenders 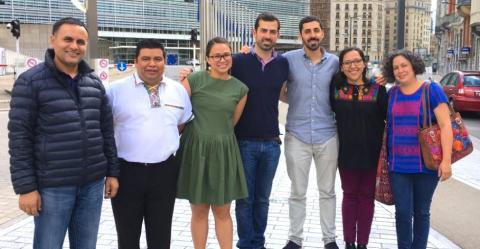 Several members of the Advisory Group have, themselves, received support from the SOS in response to serious threats and attacks, and they shared their experiences with rapid response measures coordinated by ESCR-Net in the form of collective letters, petitions, referrals for material security support and temporary relocations, among other measures.

Throughout the meeting, the Advisory Group stressed the need for ESCR-Net’s System of Solidarity to strike a balance between reactive measures, which are undertaken after human rights defenders are threatened or attacked, and proactive actions. More proactive approaches would ideally build capacities to prevent threats and attacks and challenge their root causes, including the underlying economic and political forces that both perpetuate — and are sustained by — violence against human rights defenders working to advance economic, social and environmental justice.

The Advisory Group also recommended that the SOS coordinate support for human rights defenders at risk before attacks occur, as well as during and following incidents, and that new tools and strategies should be developed in order to address the role of non-state actors, including corporations, organized crime, the communications media and others play in perpetuating threats against human rights activists.

Under the leadership of the Advisory Group, ESCR-Net’s System of Solidarity will continue to work in the coming period, both to prevent reprisals against Network members and to respond to urgent threats when they occur.