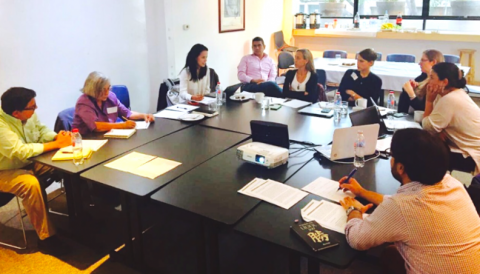 Based on their direct litigation experience with the Inter-American System, the organizations assigned priorities to items such as the current system of classification of compliance levels, the effectiveness of work meetings held by the Commission, the role of the newly appointed Rapporteur for ESCER on this issue, and the recommendations from the Commission to the States with regards to the incorporation of opinions and agreements in the domestic legal system.

The meeting in Mexico is the latest in a series of meetings started by SLWG members back in January 2017. The meeting highlights the priority given by the Group to implementation questions in the Inter-American System of Human Rights, a decision made during the ESCR-Net Global Strategy Meeting which took place in Buenos Aires in 2016. Since January, these organizations have been working on a document which will serve as a platform for future discussions with the Commission on their compliance practices.

This project is particularly relevant when you know that the majority of the Commission’s recommendations are not passed along to the Inter-American Court, and that they require an effective enforcement mechanism. As an example, up until 2009 the Inter-American Commission on Human Rights had received approximately 14,000 petitions, of which the States had fully complied with 12.5%, and partially complied with 69.5% of the cases.[1]