On April 28, 2017, the South African Company AngloGold Ashanti issued a press release regarding the mining project “La Colosa” in the town of Cajamarca, department of Tolima, Colombia. The press release announced their decision to stop all project activities, and concurrent employment and investments, until mining activity in the country enjoys guarantees.

This decision comes a few weeks after a popular vote organized in Cajamarca clearly revealed the community’s rejection of the mining project. According to the Interamerican Association for Environmental Defense (AIDA), banning mining through popular vote “demonstrates a commitment to solving environmental conflicts in a peaceful and participatory manner (…) and allows citizens to exercise their human right to have a voice in public issues that affect them —a key element of true democracy— and to safeguard their human right to a healthy environment”. 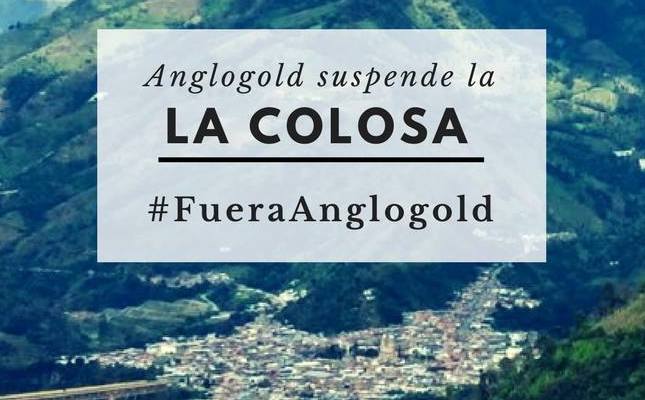 Various ESCR-Net members, including the Comité Ambiental en Defensa de la Vida, who have supported both the organization of the popular vote and efforts to compel the company’s decision to stop its activities, have shown their disapproval of the press release. They have criticized the company for talking about “paralyzing” the development instead of canceling the project completely, a demand of many environmental and human rights defenders in Cajamarca.

The Comité Ambiental asserts that the mining company should renounce the project via the following: to deliver the mining titles granted, to restore the affected area, to sell the acquired properties, to request the withdrawal of environmental permits, and to withdraw the request for the subtraction of forest reserve areas. These actions would, according to the social movement, comply with the will of the people of the town of Cajamarca, as expressed in the popular vote on March 26th 2017.

The mining company also announced its immediate withdrawal of its projects in “health, education, public services and infrastructure, among others, necessary for any municipality in Colombia”. Among the ESCR-Net members who have closely followed this case, many consider this to be a strategy to generate division in the community of Cajamarca, and an effort to shift the public narrative about the project to suggest that those responsible for unemployment and the loss of benefits are the environmental and land rights defenders.

Various organizations have also expressed their concern regarding a bill that the Colombian government is putting together to “regulate” popular votes, and to remove their binding nature. The bill will also limit the issues on which citizens can initiate popular votes, those of which include mining and hydroelectric projects. 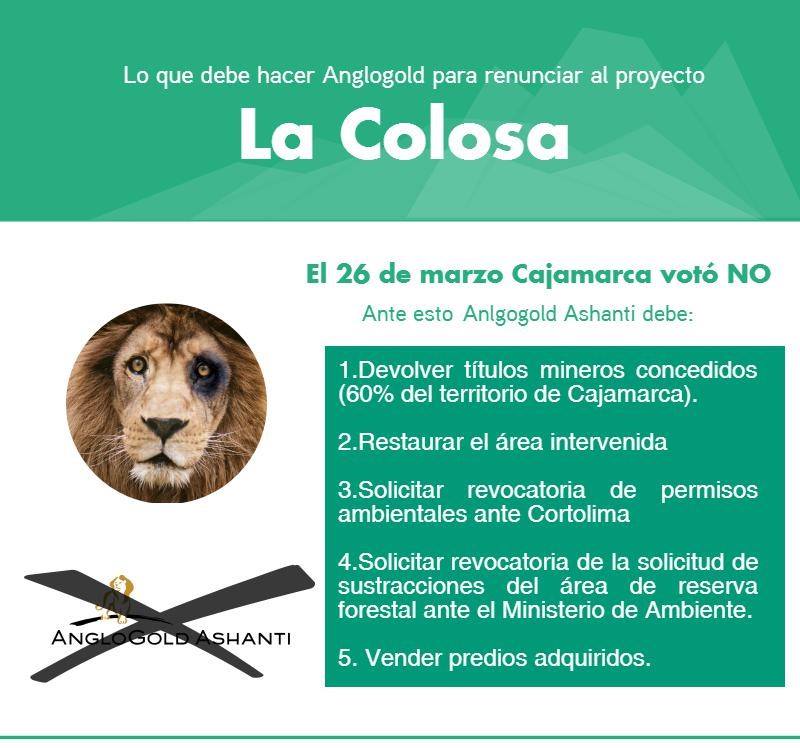 Comité Ambiental stated that “it is worrying that the national government, led by the minister of Mines and Energy, wanted to ignore and delegitimize the people’s decision, even though the popular vote is a binding democratic mechanism that enjoys citizen participation, as established in the Political Constitution of Colombia” and other laws. They also invited the people of Tolima and Colombia to “strengthen the social movement, and to defend not only the water and the collective right to a healthy environment for present and future generations, but also democracy and the decision of the sovereign people”. The Comité Ambiental stresses the importance of continuing to establish alliances with organizations around the world to denounce the violation of human rights and to demand guarantees for the rights to a dignified life. This approach is consistent with ESCR-Net’s Common Charter for Collective Struggle, developed by the Global Strategy Meeting and supported by all ESCR-Net members in November 2016.

For more information on the popular vote in Cajarmarca, please click here.