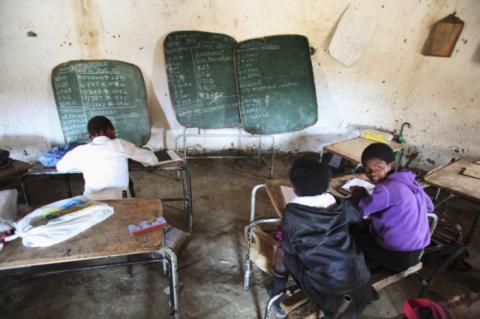 The Center for Economic and Social Rights (CESR) and the Legal Resource Centre (LRC) in South Africa effectively strengthened the implementation of a strategic case on the right to education in South Africa through the use of a monitoring framework tool.

Access to basic education for all remains far from being a reality. On behalf of a number of schools, the LRC took on the case Madzodzo v. Department of Basic Education, to challenge South Africa’s failure to ensure essential equipment in a number of schools in the Eastern Cape.

Previously, the South African High Court declared that the government’s failure to address extended delays in providing needed desks and chairs to schools was a violation of South Africa’s Constitution, which protects the right to basic education for all South Africans. Despite this positive court decision, the situation on the ground did not improve.

The case reflects a broader 20-year trend in socio-economic rights litigation in South Africa of courts increasingly ordering “dialogic” remedies. In contrast to monologic remedies that detail precise outcome-oriented orders, dialogic remedies allow government agencies to retain that discretion. Effectively, government agencies are left to determine how they will rectify a rights violation on their own. Unfortunately, government agencies have frequently failed to effectively implement these types of orders, limiting the transformative potential of strategic litigation on economic and social rights.

The CESR and LRC used the monitoring framework Outcomes, Policy Efforts, Resources and Assessment (OPERA) to carry out a rigorous analysis of the documents submitted by the South African government in the case. Via OPERA, the above-mentioned organizations identified gaps in plans and implementation and non-compliance with economic and social rights standards. The information collected through the framework exposed root causes of the lack of implementation, such as poor information management systems on school, district, provincial and national levels; and a lack furniture mentions in any infrastructure plans for the school system.

The analysis was used in follow-up legal proceedings, which led to an order in February 2016 that set out significantly more detailed obligations in terms of mandated remedial actions. The use of OPERA ultimately yielded greater visibility and increased accessible information on ESCR violations. Most importantly, it led to the identification of energetic, dedicated officials willing to engage with rectifying human rights violations.