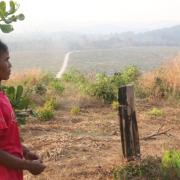 A major victory happened last week when the Cambodian government returned the lands of twelve indigenous communities in Cambodia’s northeastern province of Ratanakiri. The land had been grabbed by the Vietnamese agribusiness company, Hoang Anh Gia Lai (HAGL), nearly a decade ago.

The decision came after a process for dispute resolution was convened by the Compliance Advisor Ombudsman (CAO), the independent watchdog of the World Bank’s International Finance Corporation.

Inclusive Development International has been supporting the indigenous communities to file complaints to CAO and engage in mediations with HAGL, starting 2014. Affected communities have been represented by several Cambodian and indigenous people’s organizations, including ESCR-Net member, Equitable Cambodia.

However, the victory is still not complete. Communities filed a new complaint with CAO last week after HAGL unilaterally pulled out of the CAO mediation process before reaching a final agreement with them on issues of land and water rehabilitation and compensation for damages. The communities are calling on HAGL to return to the negotiating table to resolve these issues.

The new 117-page complaint provides extensive evidence of environmental and human rights violations resulting from HAGL’s wholesale clearance of intact forests, waterways, pastures, orchards, spirit forests, graveyards and other sacred areas belonging to indigenous communities in Ratanakiri.  The communities are particularly concerned about the loss of reserved land for practicing shifting cultivation, their traditional form of agriculture, and declining soil fertility on their current farming land if they are unable to shift to other areas. These cumulative losses have seriously eroded the communities’ sovereignty over their land and system of food production and consumption, which is deeply interconnected with their identity and way of life.

For more information on this dispute and its development, please click here.