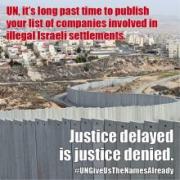 Last week ESCR-Net members called on UN High Commissioner of Human Rights Michelle Bachelet to publicly release the UN database of businesses engaged in activities with Israeli settlements. This came after Bachelet announced in a letter to the president of the UN Human Rights Council (HRC)—a 47-member-state body — that her office (OHCHR) will delay the release of the database. She has yet to commit to a date.

In response to Bachelet’s letter, Al-Haq sent their own letters to UN member states with diplomatic representatives in the Occupied Palestinian Territory (OPT), calling on states to urge Bachelet to promptly release the database to the public. These letters reminded UN member states of the illegality of Israel's settlement enterprise and stressed that the database is a mere tool to facilitate the regulation of business activities, warn businesses of potential risks (legal and otherwise), and curtail adverse human rights impacts of business enterprises in the OPT. A sentiment already expressed by HRC member states in a 2016 resolution that mandated the creation of this database.

Al Haq also launched a social media action to urge the OHCHR, the HRC, and member states to abide by their own commitments and publish the database on companies involved in Israel’s illegal settlements.

Amnesty International also submitted a statement to the HRC in support of the database. Amnesty emphasised that the elaboration, publication and regular update of the database would assist both states and companies in complying with their obligations and responsibilities—inline with the UN Guiding Principles on Business and Human Rights—to ensure protection and respect of human rights in the OPT.

Amnesty’s statement referred to its recently published report that has revealed how digital tourism companies are contributing to, and profiting from, the maintenance, development and expansion of illegal settlements. All of which amount to war crimes under international criminal law. These companies, Amnesty stated, have “the effect of ‘normalizing,’ and legitimizing to the public, what is recognized under international law as an illegal situation.”

The Center for Constitutional Rights (CCR) also launched a petition signed by more than 90 organizations from all over the world, including members of ESCR-Net. The undersigned organizations expressed deep concern to further delaying the release of the database. According the petition, “Continued delay in releasing the database would inhibit the [Human Rights] Council’s ability to provide transparency,” specifically naming affected parties as “the Palestinian people, all member-states, as well as investors that require authoritative sources of data on which to make sound investment decisions.”

The CCR petition also referred to the Human Rights Council’s own findings from its independent fact-finding mission, founded in 2012, that investigated the implications of the Israeli settlements on the human rights of the Palestinian people. In its 2013 official report the mission concluded that “some private entities have enabled, facilitated and profited from the construction and growth of the settlements, either directly or indirectly.”

Nearly three years ago, the UN Human Rights Council voted in favor of establishing this database of companies involved in business activities with Israeli settlements in OPT. The resolution requested that the UN High Commissioner for Human Rights produce the database, in consultation with the Working Group on Business and Human Rights.

Additional delays in the publication of the previously mandated database and the continued lack of transparency between the OHCHR and affected communities can undermine both the office and the database it produces. Moreover, such delays furthers the perception that the UN allows a culture of corporate impunity for human rights abuses to thrive, not only in OPT but also throughout the world.