ESCR-Net members, many of whom themselves have suffered racist violence in their own contexts, have expressed their outrage and solidarity with the anti-racist protests in the US and condemned the murders of Black people at the hands of the State in the US.

On 25 May 2020, George Floyd was murdered by law enforcement officers in Minneapolis, Minnesota. His killing is part of a brutal and well documented pattern of systemic racism and disregard for the lives of Black people in the US. Similarly, Breonna Taylor, a Black woman was shot and killed in her own bed when law enforcement officers mistakenly burst into her home in March in relation to a drug investigation. The racist nature of these killings have sparked massive protests throughout the US and globally, demanding an end to systemic racism and police violence, disproportionately targeting Black communities. The protests in the US have been met by a heavily militarized response against protesters and even journalists by law enforcement and security forces.

ESCR-Net members were quick to express their solidarity with the protesters and condemn the violence and systemic racism that met them while connecting the unfolding events to historic and systemic realities for Black and other marginalized and poor communities in the US and globally. Members have called for increased accountability and demilitarization of law enforcement. US law enforcement is heavily militarized and even smaller police departments have access to military grade equipment, such as armored vehicles, often the surplus of US military actions around the world. This has also led to calls to defund the police in order to direct these funds to social programs addressing the systemic injustices facing black, brown and poor communities. 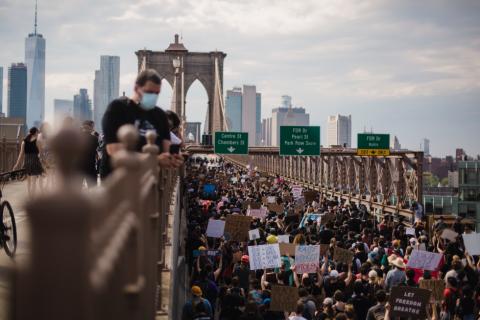 Photo by Life Matters from Pexels

Likewise, members linked the disproportionate killings of people of color to generalized racial discrimination in the US resulting in a racial disparities in wealth, access to education and health care also leading to higher mortality rates for communities of color who have been six times more likely to die of COVID-19 due to these pre-existing inequalities. ESCR-Net members denounce the murders of George Floyd, Breonna Taylor and many other sisters and brothers, friends, fellow humans in Palestine, Brazil, South Africa, the Philippines and countries around the world as brutal evidence of the systemic racism and political economy of violence used to maintain inequality and injustice globally. They commit to continue the struggle against structural racism, which clearly perpetuates serious violations of human rights, including civil and political rights, as well as economic, social, cultural and environmental rights.

Below you can find links to several related member statements: