One of the aims of the Monitoring Working Group is to support community-led monitoring and documentation across the Network. To this end, we participated to the Grassroots Women’s Leaders Exchange on the struggles for land and natural resources, held in Chiang Mai, Thailand, from 29th July to 2nd August 2019. The Exchange was organized by the Women and ESCR Working Group of ESCR-Net, and brought together about 20 women from indigenous communities and social movements across Africa, the Americas and Asia. The meeting affirmed the centrality of women in the struggles for land, housing and natural resources and in promoting an understanding of natural resources grounded on indigenous knowledge rather than on profit-driven paradigms.

Jessica Mayberry, founder of Video Volunteers (India), along with the MWG Coordinator, Francesca Feruglio, facilitated several conversations with indigenous women leaders about the role of data in their work and realities. The meeting explored the following questions:

1) How are grassroots movements gathering and using data to advance their advocacy and campaigning?

Most of the participants are involved in some kind of data collection efforts, from documentation of human rights violations and threats against human rights defenders, to participatory research to strengthen movement building at grassroots level or large-scale multi-country initiatives.

We have gathered key information on the effots of participants present at the meeting - below are three examples.

2) What gaps do grassroots women leaders see in the way governments gather and use data?

We held a collective discussion to highlight gaps in official data and recommendations for governments and external agencies involved in data gathering efforts.

Role of communities in setting the agenda: Too often, official data does not reflect the issues indigenous women, and therefore not taken into account in policy-making. Government needs to involve communities in deciding what data needs to be gathered and how. They must do this from the very beginning of any data gathering process, and focus on the data that movements and networks identify as important.

Accountability at the end of data gathering processes: Government and other entities gathering data must be accountable to communities and share the data back to people once it’s been collected and analyzed. Governments should also share information on actions taken or planned on the basis of the data they gathered. Information should be shard a timely fashion, in accessible and simplified forms and translated into local language and context n order to help people make sense of it.

Issues of validity and legitimacy: Community-led data needs more recognition and must be seen as valid and legitimate in decision-making. Government must validate and respect traditional knowledge including when this is being captured in oral and visual, or non-conventional forms.

Self-identification: Governments should recognize and respect the way in which communities and individuals identify themselves, even when these categories are not formalized in existing laws and policies. When there are multiple identities people should be able to choose which one they want to be protected under.

The inputs gathered during this discussion have been integrated to a draft collective position on data and ESCR that the Monitoring WG is working on. These inputs have also contributed to a collective submission on behalf of ESCR-Net members to UN Committee on Economic, Social and Cultural Rights in relation to the upcoming General Comment on land.

3) What priorities and needs do grassroots movements have with regards to documentation and monitoring? What kinds of data they need?

During the discussions participants identified the followings gaps and priorities:

- Data and documentation about women-led efforts and the role of women within social movements struggling to advance land, housing and natural resources;

4) What support would participants like to have in relation to documentation and monitoring? What practical issues and challenges are they facing?

Most of the participants pointed at the need for adequate resources to carry out their own documentation and monitoring. In particular, they expressed the need for technical support in designing and implementing documentation methodologies around the areas highlighted above, particularly in ways that address issues of safety, and for support in analyzing the data. These resources could be provided through trainings, partnerships with other members or relevant stakeholders and financial support.

Examples of community-led documentation and monitoring:

Indigenous women lag behind in may areas, such as education, health, livelihoods, access to land and natural resources. For this reason, AIPP along with several other partners, developed a tool called Indigenous Navigator to gather data that reflect the realities indigenous women live, and the gaps in the implementation of existing policies.

The indigenous navigator provides a solid framework to assess the implementation of the rights enshrined in the United Nations Declaration on human rights of indigenous people and other human rights conventions. It allows monitoring the extent to which states are meeting their obligations. It covers 13 different issues, from traditional indigenous knowledge, to education, livelihoods etc. This framework is then contextualized and localized at community level in several ways. In conversation with community members, AIPP and its partners prioritize few key issues and tailor the questions accordingly. The questions are translated into local languages and the data collectors are women and youth from the community. Although it requires significant investment of time and resources, these step are essential to ensure community ownership over the data.

AIPP’s model is grounded on community and collective action. The Indigenous Navigator is currently in its second round of piloting and is being used in 11 countries in Asia.

Once the data is collected, AIPP compiles it and analyzes it in order to show states’ progress and gaps in meeting their legal obligations. This analysis forms the basis for advocacy and lobbying with a number of stakeholders, from local and national level government to international bodies. The findings have been very valuable for designing systematic interventions around strategic issues such as education, and present policy-makers with solid evidence that reflects the realities of indigenous women. The validity of the data has at times been questioned, for instance when engaging with policy-makers. AIPP has responded to these challenges by inviting stakeholders to visit communities who participated to the data collection to verify the data directly on the ground.

For more information on the Indigenous Navigator please see: http://nav.indigenousnavigator.com/index.php/en/

For the last several years APWLD has been running Feminist Participatory Action Research Projects to support movement building and organizing. FPAR is a framework grounded on research and documentation which is led and carried out by communities for their own goals. The methodologies used are often based on storytelling, participatory mapping, drawings and other techniques that are geared at involving women from different background and articulate a common vision and strategies for what they’d like to achieve. Researchers belong to the community where the research takes place, and the process is designed to build their capacity and opportunities for advocacy, with the support of a mentor and APWLD's staff . 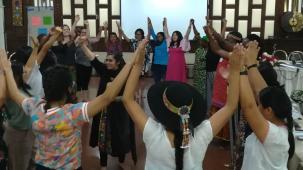