Since the onset of the pandemic, ESCR-Net members have taken up the call for a just and equitable recovery, demanding  in our Global Call to Action that states and international bodies respond immediately to the public health emergency and take transformative actions that would lead us to a new normal rooted in justice and radical transformation. We have subsequently illustrated the need to end the corporate capture of our health care systems, have called upon UN Special Procedure Mandate Holders to take urgent action, have filed human rights complaints with UN Treaty bodies, and are engaging in legal action against state’s blocking the TRIPS waiver.  Yet despite this wide range of advocacy interventions,  we are still witnessing and experiencing how this global health emergency continues to deepen inequalities and intensify global injustices.

On November 23rd, just one week before the World Trade Organization (WTO) Ministerial Conference was scheduled to take place, ESCR-Net hosted an online global rally and teach-in, co-sponsored by Movement Law Lab, Medecins Sans Frontieres, and The People’s Vaccine Alliance. Thanks to the work of a dedicated planning committee, our energetic MC Debbie Stohard (ALTSEAN, Burma), and powerful interventions from 25 members and allies, the rally shed an important light at the structural forces prolonging the pandemic, its impact on frontline communities, and the urgent actions that are being taken to in the struggle for health justice.

Nearly 200 ESCR-Net members and allies joined together to amplify the voices of our communities who have been most affected by the inequalities exacerbated by the WTO’s refusal to pass a comprehensive waiver on the Trade Related Aspects of Intellectual Property Rights (TRIPS) agreement on COVID-19 vaccines and therapies.

Corporate Capture of Our Health Care Systems: We’ve Been Here Before

From it’s conception, the World Trade Organization was designed to serve the interests of the imperialist, capitalist class, prioritizing profit making over human rights. As Azra Talaat (Roots Equity Pakistan and  APWLD) so aptly puts it, “The WTO is like an octopus that squeezes us of our livelihoods, our resources and our health.” At the heart of the intellectual property rights regime lies  the TRIPS agreement which exists in order to capture all innovation and scientific advancement for the sole purpose of creating profit from knowledge. Unsurprisingly, both the development of the WTO and it’s agreements (including TRIPS) were heavily shaped and influenced by the corporate sector, including the pharmaceutical industry. Due to the corporate capture of our health care systems and of international institutions, companies like Pfizer (who are in staunch opposition to the TRIPS waiver), exerted immense influence and lobbying power during the formation of the WTO and were a driving force behind the inclusion of intellectual property rights in trade negotiations.  These policies cemented the idea that healthcare is commodity and in doing so, they have led to an incredible amount of exploitation, suffering, and are quite literally responsible for the loss of lives for millions. 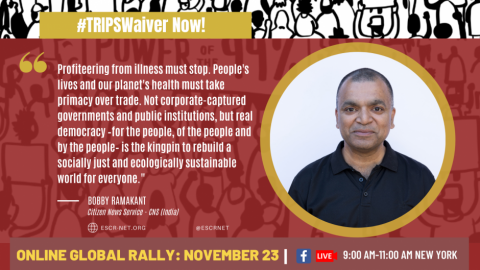 And while the COVID-19 Pandemic may be unprecedented in many ways, this struggle for medicines and vaccines in the global south is hardly novel. Sibongile Tshabalala (Treatment Action Campaign, South Africa) shared her personal story of living with HIV and recalled the fight for antiretrovirals (ARVs) in South Africa. After a long struggle for access to ARVs across the global south, and after countless preventable deaths, Big Pharma was eventually forced to remove patent barriers allowing for the development of generic and affordable HIV medications, in turn dramatically shifting the situation for millions of people living with HIV. In  2001, the Doha Declaration was adopted by the WTO and celebrated as a critical step forward in bringing an end to the AIDS epidemic ensuring that the TRIPS agreement does not infringe on States’ abilities to protect public health needs. Yet, instead of this watershed moment creating a new precedent in the fight for health justice,  the pharmaceutical industry and rich states continued to “work to undermine the public health safeguards” as Leena Menghaey (MSF) pointed out.

Trade policies at the WTO fit into the larger structure of neoliberalism where structural adjustment policies and larger priviatization efforts at the behest of International Financial Institutions (IFI’s) have left community health sytems unable to ensure access to quality healthcare in the face of a gloabl pandemic. In Tunisia, the gutting of public health care services and the privatization of healthcare has turned this fundamental right into “ a luxury for only those who can afford it” as noted by Najoua Baccar (ATFD, Tunisia).   As Dan Owalla (People’s Health Movement, Kenya) precisely noted , “the pandemic has revealed that capitalism is unsustainable and inconsistent with equality and human rights.”

This capitalist and colonial system that prioritizes profits over our lives has allowed for astronomical levels of profits to be generated in the hands of a few pharmaceutical companies.  As reported  by the People’s Vaccine Alliance, the three leading vaccine manufacturers, Pfizer, BioNTech and Moderna, are making a combined profit of $1000 per second.  These profits, however, are the direct result of publicly funded research and development efforts as noted by Alejandra Scampini (PODER, Mexico). However, members of ESCR-Net are challenging the phenomenon of corporate capture, using popular education tools like the Power of the 99% Comic to educate our communities. In Colombia, Martha Grisales (Comité Ambiental en Defensa de la Vida) shared how they have been connecting with their community around how economic elites have influenced regional, national, and international decision making spaces. 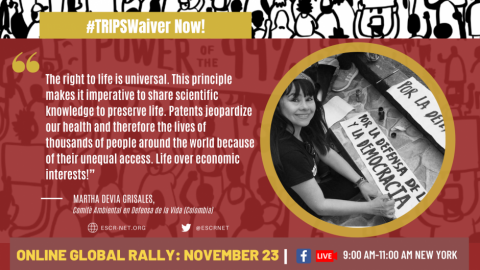 “Change not Charity”: The struggle to end vaccine apartheid

The deleterious and disproportionate impact that the pandemic has had on communities in the global south, on poor and working class communities, on Black communities and communities of color, on women and gender oppressed people, on communities affected by war and occupation, and on so many others who are excluded from decision making tables is undeniable. As Allana Kembabazi (ISER, Uganda) precisely stated  “the system is broken and we in the global south have always known that.”  Unfortunately, for many communities, the pandemic is just another hurdle in the struggle for justice. In Palestine, Issam Younis (Al-Mezan, Palestine), highlighted the multiple barriers faced by communities in Gaza, who are denied fundamental healthcare due to both vaccine apartheid and Israeli aparthied. The disproportionate impact on women in their diversity  is also evident, as Mandi Mudarikwa (Women’s Legal Centre, South Africa) stated, “gender remains a key determinant of health in all countries around the world… because women are predominantly considered as  caregivers.”

It is abundantly clear that until all communities enjoy their right to safe and effective vaccines, therapeutics, testing, and other important medicaments, this pandemic will never end. States in the global south have the capacity to mass produce vaccines but are being blocked by wealthy states in the global north from utilizing their know-how and expertise. As Ana Caistor Arendar (Progressive International) indicated through the example of how Bolivia’s attempt at using the compulsory licensing mechanism to produce vaccines through an agreement with a Canadian drug manufacturer, Biolyse, was blocked by the Canadian government.

However, ESCR-Net, along with our partners, are challenging the actions of states like Canada through domestic litigation efforts and demanding that they fulfill their human rights obligations under international law to protect the right to health of people. As Miriam Saage-Maaß (ECCHR, Germany) reminded us, Article 12 of  the International Covenant on Economic, Social, and Cultural rights (ICESCR) affirms the fundamental human right of health.  In addition, members have also filed complaints with UN treaty bodies including the Committee on the Elimination of Racial Discrimination (CERD) demanding that the committee call upon states to support a comprehensive TRIPS waiver.  Ohene Ampofo-Anti (Center for Economic and Social Rights), detailed the complaint stating “the inequitable access of vaccines has had racially disparate impacts on racial and ethnic minorities; Black people; Indigenous people; women in their diversity; LGBT populations; persons with disabilities and people at the intersections of the aforementioned grounds.” 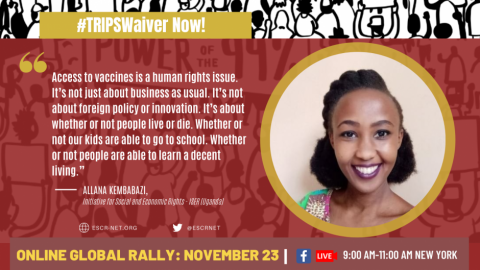 The ironic postponement  of the WTO Ministerial conference due to the discovery of the Omicron variant could not paint a more clear picture of why the TRIPS waiver is an essential step in the fight to end vaccine apartheid. While the fight for the waiver remains an urgent priority in the fight to end vaccine apartheid, we know that what we really need is long term systemic change, otherwise this deadly cycle is bound to repeat itself. As Leena Menghaney (MSF) stated, “the TRIPS waiver should be a beginning, not an end.” The struggle for ARVs showed the world that healthcare is a fundamental human right that demands respect, not only during moments of crisis. As Maaza Seyoum  (African Alliance and People’s Vaccine Alliance) so brilliantly concluded us, “we are not asking for charity, we are asking for justice.”

ESCR-Net members are continuing to agitate, advocate, and organize, until all people enjoy their rights to life and dignity. If you are interested in getting involved in ending vaccine apartheid, please feel free to contact ESCR Net Campaign and Membership Coordinator, Basma Eid at beid@escr-net.org .

Watch the Rally (In English):