Publish Date:
Wednesday, December 7, 2022
A space for collective learning, participation and diverse and regional organization: this was the Feminist Forum of the XV Regional Conference on Women held at the Espacio Memoria y Derechos Humanos (Ex ESMA) on November 7 in Buenos Aires, Argentina. 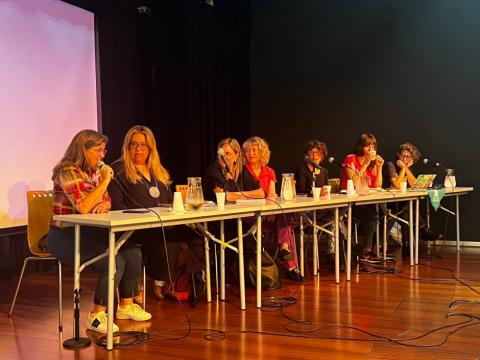 The forum preceded the ECLAC’s XV Regional Conference on Women.

Members of ESCR-Net’s Women and ESCR Working Group joined more than 2,000 women, youth, LGBTQ collectives, Afro-descendants, indigenous people, migrants, and people with disabilities - from rural and urban contexts, from more than 30 countries in the region. This Forum, the largest held to date, served as a prelude to the XV Conference whose central theme was the challenge of building a care society and the economic and social recognition of care. As Vanina Escales from CELS, who helped organize the Feminist Forum, said, “Today, more than ever, it is crucial to ask ourselves what kind of societies we want, what kind of care society we want, how to put life at the center of our societies, instead of the market and other types of relationships, and what bonds we want.”

The Forum opened with an ancestral ceremony performed by different indigenous women leaders from the region, followed by welcoming remarks from representatives of civil society, such as indigenous organizations, trade unions, movements from various countries and from international organizations and the public sector, UN Women’s Regional Bureau for the Americas and the Caribbean, and ECLAC’s Division for Gender Affairs. 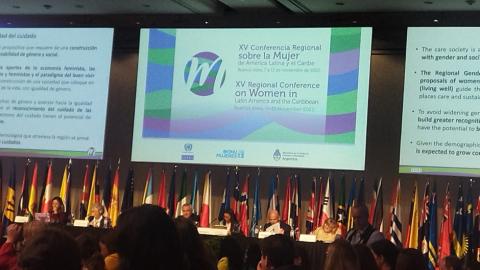 ECLAC’s XV Regional Conference on Women.
They agreed that care must be placed at the center of any debate about economic and social recovery in the region. However, they pointed out that the road to strong legislation and for the care agenda to be recognized as central to the sustainability of life, as a right in itself and as work, is ambitious and arduous.

On the one hand, there is the conviction that the pandemic revealed that care is at the very heart of our societies and economies, yet it remains largely unrecognized and invisible, and is increasingly privatized and commodified. On the other hand, it calls for the promotion of care work as a human rights issue and the urgency of moving towards a new social contract of care. To understand this urgency, it is enough to look at ECLAC data, which show that even before the pandemic, women devoted more than three times as much time to unpaid work as men. Likewise, in households with children, women were more overburdened with care work (with the usual consequences for their participation in the labor market).

What does changing this dynamic depend on?

On economic recovery policies being studied in light of feminist economics, simultaneously taking into account the impacts generated in both the productive and reproductive spheres. “We have much to learn from feminist economics to strengthen alternatives that put life at the center, starting from a feminist approach and valuing collective and democratic processes,” said Irene Aguirre from Fundeps. For the Network’s members it is important to join this regional agenda.

“We come to contribute with our proposed framework of the 6Rs, which are key policy demands aimed to: redistribute, recognize, reduce care, ensure representation, reformulate the economy as a solidarity economy, and fulfill the rights of caregivers and recipients,” said Claudia Lazzaro from SOCRA.

The perspective of domestic workers is also key. In Latin America and the Caribbean, according to ECLAC, around 13 million people were engaged in paid domestic work in 2019, 91.5% women, many of them Afro-descendants, indigenous, and/or migrants. Ida le Blanc, director of NUDE, headquartered in Trinidad and Tobago, highlights the importance of strengthening the representation of domestic workers, especially informal workers and community care networks, so they are included in proposals for feminist, ecological and social justice care societies.

The issues addressed during the discussions included: the elderly’s and people with disabilities’ right to care and be cared for; the co-responsibility of care between genders and the visibility and economic and social recognition of care work. The importance of civil society in demanding and monitoring public policies that help close gender gaps in the region was identified as an important priority. The defense of the care for water sources, the earth and the planet were also prominent.

These struggles challenge corporate power and build strategies for the defense of biodiversity and the land rights of indigenous peoples and local communities, the protection of human rights defenders and the advance of systemic change.

Other urgent issues such as the reality of LGBTIQ+ people, access to comprehensive sexual education, contraception and abortion, health care for trans and transvestites, and the fight against gender violence were raised. There is much to learn from our colleagues in Argentina and the Green Wave. 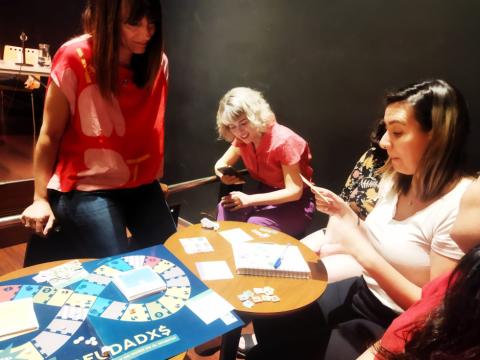 Also present was the loving memory of Honduran feminist and indigenous leader Berta Cáceres, assassinated in 2016 for defending the environment; Brazilian councilwoman Marielle Franco, assassinated for defending the rights of the Afro-descendant, women and the LGTBI collectives in Rio de Janeiro in 2018; and other fellow human rights defenders who were assassinated for challenging corporate power and patriarchy. Strong calls were made for the release of political prisoners in Nicaragua, the repudiation of violence against Mapuche peoples and Garifuna women leaders in Honduras in the face of violent evictions and their claims to their ancestral lands.

Finally, as the official declaration states:
“Today, diagnoses, good intentions and comprehensive statements are not enough, it is essential to promote and build concrete structural responses with the participation of multiple actors, from a perspective based on human rights and gender equality, that is intersectional, cross-cutting and inclusive of all diversities that today are discriminated against and excluded. Today, more than ever, we demand social justice, economic justice and gender justice!”