Publish Date:
Wednesday, December 21, 2022
From 24 - 28 October, a delegation of ESCR-Net members attended the 8th session of the negotiations for a Legally Binding Instrument on business and human rights (OIGWG). Alongside allies, members advocated for an instrument to regulate corporate power 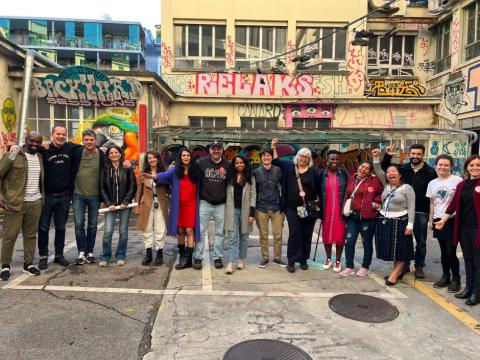 ESCR-Net members, partners & allies after attending the treaty sessions in Geneva from 24 - 28 October to advocate against corporate capture and for a strong binding treaty to regulate corporate power.

Why the third draft emerged as a unanimous advocacy target

Along with several key Global South States, many social movements, Indigenous Peoples’ representatives, and civil society organizations have engaged meaningfully in the process in order to establish the third revised draft.

One main challenge was that the chairperson of the process, Ecuadorian Ambassador Izquierdo Miño, made efforts to introduce a second document as a basis for negotiations. The document submitted by the chairperson only a short period before the beginning of the session, included proposals for changed and weakened articles, especially on prevention, legal liability, and extraterritorial jurisdiction. The proposals seemed to be influenced by the United States (US) and business representatives like the International Organization of Employers (IOE).

As a response, ESCR-Net, The Treaty Alliance, The Global Campaign to Reclaim Peoples' Sovereignty, Dismantle Corporate Power and End impunity,  the Feminists for the Binding Treaty,  and the Young Friends of the Treaty, expressed their discomfort and called States to base their negotiations on the Third Draft.

“It was a very stressful week early this week -- it looked like there was an attempt to undermine our work but our pressure during the week prevented that from happening and we have kept it alive to fight another day,” said Wesam Ahmad (Al-Haq, Palestine).

The elephant in the room is corporate capture

Under the multiskateholderism scheme, the treaty process has been heavily captured with corporate representatives lobbying States, particularly from the Global North, in order to prevent progress on critical issues that could prevent corporate abuses and violations.

“As part of the peoples and civil society in the world in which we are fighting for life and peace, I realize that we are facing another power that has a lot of influence at a global level, which is business enterprises. And how governments collaborate so that this treaty does not advance. It is worrying,  but let us not lose our hearts and let us move forward,” said Juana Toledo (Consejo de Pueblos Wuxhtaj, Guatemala).

ESCR-Net members held a side event on the first day of the treaty session to amplify our demands and influenced discussion on corporate capture in the afternoon session of the treaty, which was attended by diverse States, including Palestine, Uruguay, Malaysia, Luxembourg, Austria, and Portugal.

Of note, the report of the session prepared by the Secretariat of the treaty session included the following paragraph:

“In the discussion that followed, delegations and non-governmental organizations raised a number of questions and comments in response to the panelists’ interventions. Among the issues discussed were whether increased business participation in the working group would lead to corporate capture and what could be done to limit such risk…”

See the report in full here.

Friends of the Chair

Another issue raised by our members addressed how key transparency is in the assignment of States as "Friends of the Chair" of the process who would support the treaty.

Thus far, Indonesia, Azerbaijan, Cameroon, Uruguay, France and Portugal have been designated by the Chairperson of the process (announced in October 2022) to be Friends of the Chair but it wasn't clear how their selection came about. Cameroon was announced as part of the Friends of the Chair group on the last day of the treaty session - while others were announced earlier in the month. Our members also agreed to push for appropriate regional representation in the group of Friends, urging that additional States from the Global South be represented and that regional consultations be held before negotiations occur next October. Finally, civil society organizations agreed that the upcoming work of the Friends of the Chair must be transparent in this process and particularly in between treaty sessions and intersessionals. This must entail the active engagement of affected communities, social movements, Indigenous Peoples’ representatives, and other civil society organizations in all sessions.

“Although it is a practice for States to meet, it is an incredible lack of transparency for them to meet behind closed doors when the people affected and the victims are the main reason for working on this treaty,” pointed out Ivette Gonzalez (PODER, Mexico).

Global South must champion the process

As part of ESCR-Net’s advocacy strategy, in 2022 members engaged in regional advocacy missions in Latin America, Africa and Asia to meaningfully engage States in the Global South in the treaty process. Although more work needs to be done regionally (especially in Africa and Asia), throughout the week there was robust participation from States in the Global South, most of which contributed to the conversation to strengthen the text.

Members also engaged with States both in bilateral and multilateral meetings, as well as by reading interventions in plenary of the session, to ensure that the substance of the treaty remains strong or is further strengthened to protect and remedy people against corporate impunity - and to hold corporations and other involved accountable for acts or omissions that violate or abuse our rights.

“The struggle as Indigenous Peoples is to include in this treaty the safeguarding of territories, land, water and everything that surrounds us. What I saw and analyzed in this space, is that despite our cry, companies have more influence in this process and are not seeing the reality, the real extermination of people and the planet, and I see them more interested in resources,” said María Carreño (CAOI, Colombia).

We witnessed several attempts by States such as the US to undermine the heart of the legally binding instrument in provisions on prevention, legal liability and extraterritorial obligations and jurisdiction. Based on interventions by business actors in the room, it was clear that this was an effect of corporate capture of some key States in the room - particularly Global North States. Fortunately, the process remains strongly influenced by countries of the Global South where most communities affected by corporate abuse and violations are.

Going forward, we must continue working with States - particularly in the Global South - to ensure they meet regularly and in a transparent way throughout the year to advance stronger language  and move us forward to adoption and implementation.

Watch some videos and tweets about the side event

Palestine, Uruguay, Mexico, Namibia, South Africa and several other States made some constructive comments on the third revised draft regarding the protection of Human Rights Defenders, environmental rights, gender rights, child rights, right to self-determination, rights of communities in the context of armed conflict and beyond. Most States, including Argentina and Brazil, agreed that the third revised draft treaty and comments made directly on it by States should be the basis of ongoing negotiations but this remains to be seen and solidified in future sessions.