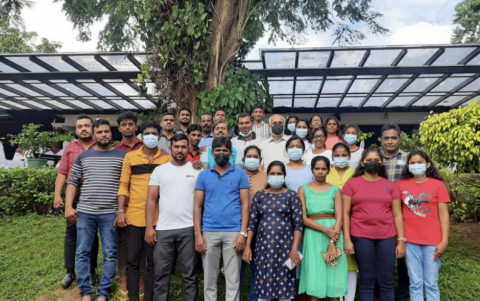 How can grassroots organizations leverage digital media to support their campaigns? What resources are needed? Last January (6th-11th), ESCR-Net members National Fisheries Solidarity Organisation (NAFSO) and the Blue Club held a workshop on media campaigning in Colombo, Sri Lanka. 27 activists from across the country, the majority of whom were young people, participated in the training. 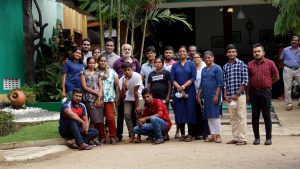 The Blue Club is an Indian grassroots media organization that strives to ”pass the mic and amplify the voices of the suppressed who have been deliberately silenced and muffled for generations.” NAFSO is one of the five social movements members of ESCR-Net who are participating in community-led research on the impacts of corporate actors on human rights and the environment. The initiative, called Reclaiming our stories’, seeks to ensure communities have the data they need to influence local decision-making and articulate their own vision for the future.
NAFSO’s national convenor, Herman Kumara, and Priyadarshini Palaniswamy, Blue Club’s Director, reflect on how the workshop has strengthened their work.

Herman, why did NAFSO want to strengthen their capacity on digital media?

NAFSO is a social movement that tries to address people’s issues through advocacy campaigns on a wide range of social development issues. We need support from the public and for that we need to raise awareness in various ways. Media is one of them. In the past when we attempted to raise awareness through mainstream media but this was not very successful. Only a few mainstream media stations responded positively, and their interest was limited to few events and actions. When we tried to raise issues related to neoliberal economic policies most of the media stations –which are owned by capitalists groups–did not support our efforts as they are more attached to capital rather than people’s issues and grievances. Hence we wanted to use an alternative media which we can handle, operate, and easily access.

We believe that social media is very appropriate for us as it can be handled directly by our activists and members. We felt that forming our own media team and developing a media strategy would strengthen our campaigns and visualize the people’s issues. Since NAFSO has a vibrant youth membership who already make use of social media – such as Whatsapp, Facebook, Youtube and in some cases Instagram- we decided to train them on using digital and social media to highlight people’s issues and conduct advocacy campaigns.

Herman, what excited or encouraged you about the work of the Blue Club?

Blue Club team was friendly, very close to the team members of NAFSO, very generously sharing knowledge, techniques, and tips. On top of this, their staff speaks Tamil which is the mother tongue of most of the participants. This encouraged deeper participation and gave a better understanding about digital campaigns. 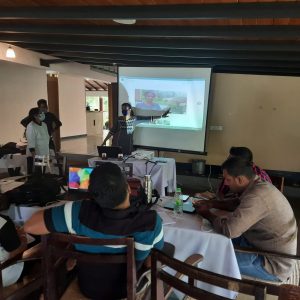 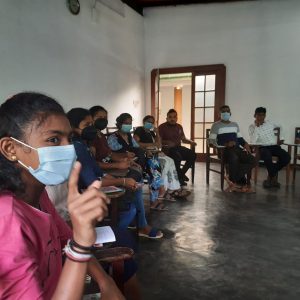 Priya, What encouraged you to share your experience on media campaigning with NAFSO?

We were introduced to NAFSO by Francesca Feruglio, Coordinator of ESCR-Net’s Monitoring Working Group. We were immediately impressed by their grassroots work as a national organization with their presence all over Sri Lanka. We have so far done many capacity building programs with small emerging organizations with lesser regional presence. As a young organization ourselves we wanted to see what it takes for an organization to build and grow for 25 years (five times our organization’s age!). But the most important thing we wanted to get out of this workshop was to increase the curiosity of participants about media tools and develop a thirst in them to keep engaging with media even after the end of the workshop.

Priya, what were the most important lessons or skills that you were hoping to share?

One of the primary skills that we wanted to share with the participants was to think visually. We achieved this by developing their story-telling skills, hands-on experience with applications, by creating an  interactive environment, engaging in team work using exercises based on theatre workshops etc.

Secondly, we wanted to introduce multimedia content creation using the Canva application which is a free versatile software used by many grassroots (and big) organizations. We wanted to teach creative tools to modify and personalize the content instead of relying on templates in the application.

Likewise, we wanted to develop video-making skills and made all participants produce videos in teams using simple techniques and just their mobile phones. We also shared video editing skills using Filmora and In shot applications. 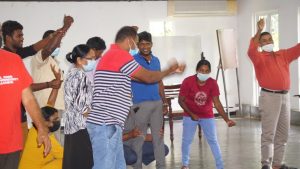 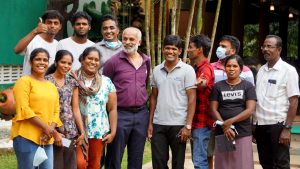 Herman, what are some of the key things you learned during this workshop?

A key lesson for me is the need to use simple techniques that are easily accessible to the participants. I also learned the importance of ensuring free and open space when working with young people, as this encourages creativity and brings about better results.

With regards to specific skills, myself and the rest of the team learned how to produce campaign posters using Canva, and to produce and edit videos to use in campaigning, which was the most exciting part of the workshop, although this aspect will require more practice. We also learned how to develop and launch an effective digital campaign in a coordinated, focused manner. The learning was effective because simple techniques were explained in a very attractive and effective manner. Participants were able to access free tools available on the internet and use them to produce videos and posters.

Finally, something that struck me is how the choice of trainers and resource persons who are close to participants’ minds and hearts increase the effectiveness of the learning.

Herman, how will NAFSO use these learnings in the context of the ongoing community-led research, but also in the longer term?

During the workshop itself we developed a range of posters and campaign materials for our 25th year anniversary and the International Year of Artisanal Fisheries and Aquaculture.

Within the context of the community-led research we are conducting [1] on the impacts of the National Physical Plan, we aim to involve the youth and activists from the 15 areas where the research is taking place in developing media materials on the issues that emerge from the research. One challenge we will need to deal with is around continuing to support activists in their own locations to produce media content. For this purpose we were able to engage a local media group of mobile journalists (MoJo) MoJo, who we invited at the training. The MoJo team will provide platforms to share our content to a wider audience, as well as continuous training and support and a wider spectrum of opportunities for our young activists beyond the community led research process. 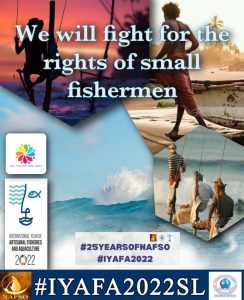 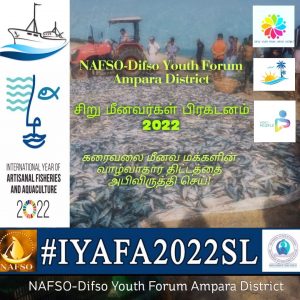 Priya, what did the Blue Club staff get or learned from this experience?

We do not have words to explain all the inspiration and good vibes NAFSO gave us in this very short time. Led by the very kind and humble  Herman Ayya, NAFSO is not just an organization but a thriving community of young leaders who are truly committed to the people’s cause.  We were very much connected to all of them with a common sense of purpose; to fight for the social cause, for equality and for the rights of  the people. Being neighboring countries and being especially closer to Srilanka, we had quite an understanding of the work being done by  NAFSO. Therefore, we were able to organize our workshops quicker and deeper in every sense.

One of the key takeaways from this experience is the importance of capacity-building workshops for our team. Being a small organization with  scarce resources we have never focused on separate workshops for our team. We divert all our resources to our programs and always give    last priority to team building activities. After seeing the NAFSO team bond and work as a team in these workshops we wanted to organize  something like this for our own team back home.

Priya, what challenges do grassroots groups and communities face in using digital media to highlight their perspectives and raise     their voice?

One of the biggest challenges is the lack of technological resources in the hands of marginalized groups. Even though we are in a digital age, in India and many other south Asian countries many people still do not have access to the internet. In some areas, such as Kashmir, internet is wantedly removed from people’s hands. It is important to make sure that grassroots groups have access to internet, mobile phones, cameras, laptops etc or it will lead to an invisibilisation of their activities and human rights violations which would go undocumented. Many funders still believe that such technologies are a luxury for a grassroot organization, but the truth is that they are a necessity, and sometimes the deciding factor in saving lives.

Another challenge is the mindset of the grassroots workers themselves. We are conditioned to think that media is for the “big people” or that we are not “technically sound”. This mindset is more prominent with women-led groups and groups with older populations. Regular media knowledge sharing workshops will help the organizations overcome this problem and see media as an important tool in our movements.

[1] NAFSO’s research consists of a survey, Focus Group Discussions and community mapping. The data is being collected by 35 community researchers, out of whom 20 are women, in 15 locations across Sri Lanka.