Working Group on Women and ESCR shared the impacts of the economic crisis on women’s rights and advocated a substantive equality approach at the seventh session of the UN Working Group on the issue of discrimination against women in law and in practice. 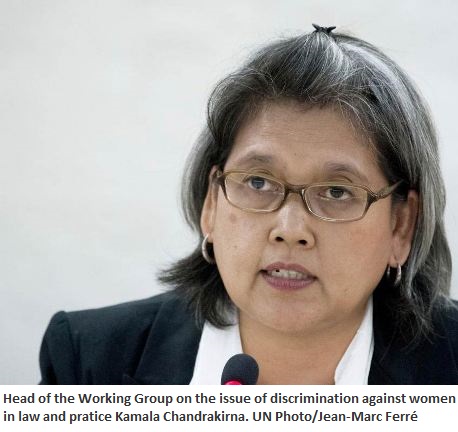 On July 3, the ESCR-Net Working Group on Women and ESCR group participated at the 7th session of the UN Working Group on the issue of discrimination against women in law and in practice, which was held in New York City. Ximena Andión, co-founder of Equís and director of Instituto de Liderazgo, represented the collective input and recommendations of the ESCR-Net Working Group.
The Working Group on Women and ESCR submitted a presentation structured into two parts: the first one addressed the impact of the economic crisis on women’s rights and gave examples of the conditions of poverty, work (including formal employment, informal employment, non-remunerated work, and the situation of domestic workers) and social exclusion in some countries and regions.  The second part made recommendations in terms of the way forward.  The recommendations were focused on how to integrate a substantive equality approach, on how to reinvent the world, on how to push the boundaries of human rights and on how to implement post 2015 Framework (MDGs and SDGs).  Please see below for a summary of the presentation made on behalf of the Working Group.
The presentation built on strong examples of conditions, laws and measures from different countries, based on the information provided by members.  We would like to especially thank the following organizations and persons that sent us the questionnaire with very relevant information: Equis, Mexico; Prof. Karina Batthyany and Dr. Matilde Saravia, Cainfo, Uruguay; Kebetkache Women Development & Resource Centre, Nigeria; Center for Women’s Global Leadership(CWGL), USA; Latina/o Critical Theory (LatCrit), Puerto Rico; National Union Of Domestic Employees, Trinidad and Tobago; The Egyptian Association for Community Participation Enhancement, Egypt; Women and Law in Southern Africa (WLSA), Zambia. Also, we’d like to thank AWID, Avocats Sans Frontières, FIDA-Kenya, and CWGL for helping us in the distribution of the questionnaire.  As a result, we have already received a few additional questionnaires, which will inform input during the next session of the UN Working Group.

As a result of our participation in this consultation, the UN Working Group on discrimination against women in law and in practice is willing to continue the exchange with the ESCR-Net WG and has showed interest for involving our Net in future activities. In particular, our WG has been invited to participate in the 8th session of the UN Working Group which will be held in October in Geneva. We would like to encourage groups and individuals from the ESCR-Net who have relevant information to share or are interested in this process to be in contact.  For further information or to get involved, please contact Graciela Dede at: WESCR [at] escr-net.org.

Women’s social and economic inequality is deeply entrenched in the historic subordination of women and the traditional roles of women in society, which perpetuate such inequality. Economic, social and cultural rights are particularly important for women since they are disproportionately affected by poverty and marginalized in the public and the private spheres.  The Montreal Principles on Women’s Economic, Social and Cultural Rights rightly assert: “Women’s poverty is a central manifestation, and a direct result of women’s lesser social, economic and political power. In turn, women’s poverty reinforces their subordination, and constrains their enjoyment of every other right."[1] Members of ESCR-Net’s Working Group on Women and ESCR agree that the current financial and economic crisis has had gender-specific impacts and has placed a disproportionate burden on women, particularly poor, migrant and marginalized women. For instance, statistics reveal that women make up 70% of the 1.2 billion people living in poverty, and among the poor, women are “the poorest of the poor” in most developing countries.  Yet this data does not fully reflect the poverty that women may be experiencing within their households: a household may not be considered poor given their income, but women in that household may not have access to any resources. Even if a woman works outside of her home, the power dynamics in the family may mean that she gives all her income to her husband.

In economic crises, there are usually cuts in social spending, such as health and education, which increase the unpaid domestic and care-giving work done by women to make up for the care no longer provided by the state. This reinforces women’s roles as caregivers of children, the sick, and the elderly.  Further, women are also particularly affected by the reduction of social programs and subsidies, since they are usually in a situation of socio-economic marginalization and may have benefitted from some forms of public expenditures.