Mexico: protect the rights of the Yaqui indigenous people

On 30 June, 2014 ESCR-Net sent a letter to urge the Government of Mexico to protect the rights of the Yaqui indigenous people who face serious threats as a result of the development of the “Independence Aqueduct” in the state of Sonora. The letter, initiated by ESCR-Net Members, Centro Mexicano de Derecho Ambiental (CEMDA), el Centro de Análisis e Investigación Fundar and  Habitat International Coalition América Latina (HIC-AL), expressed concern about the construction of the Aqueduct and the serious threats posed by the project against the environment, culture and way of life of affected Yaqui communities. ESCR-Net also raised concern about the lack of consultation of the Yaqui people and the denial of their right to free, prior and informed consultation and consent. 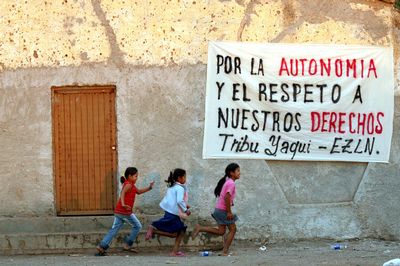 The lack of demonstrated effort by the Government of Mexico to implement a recent Supreme Court decision that upheld an injunction against the project and a recent decision to continue extracting water from the Yaqui River threatens severe and irreparable environmental, cultural and social harm, and serious human rights violations, to which the Yaqui people would be subjected. In addition, the letter expressed concern regarding the issuance of arrest warrants for several Yaqui traditional authorities during the present conflict with the aqueduct, and underscored the critical importance that traditional authorities be able to perform their official community functions and freely defend their rights without experiencing harassment or repression.

Recalling Mexico’s obligations as a party to the International Covenant on Civil and Political Rights (ICCPR) and the International Covenant on Economic, Social and Cultural Rights (ICESCR) as well as the “Protocol of San Salvador,” ESCR-Net also reminded Mexico of its duties according to the United Nations Declaration on the Rights of Indigenous Peoples and the International Labor Organization Convention No.169 and the United Nations Declaration on Human Rights Defenders. The letter urges the Government of Mexico to ensure the right of indigenous peoples to free, prior and informed consent and conduct consultations in accordance with international standards; avoid any measure that impedes the activities undertaken by civil society organizations to defend their rights; enable the Yaqui tribe, as well as all indigenous people, villages and communities, to promote, respect and protect the human rights of all people facing development projects that have the potential to negatively affect their fundamental rights; and to strive for the full realization of economic, social and cultural rights in Mexico.