On 5 December, ESCR-Net sent a letter to the Government of South Africa to raise grave concern regarding a recent wave of alleged assassinations, threats, arbitrary detentions and other acts of violence and intimidation against leaders of Abahlali baseMjondolo, movement of shack dwellers of South Africa. 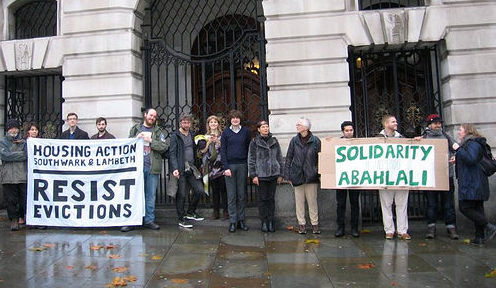 Reportedly, on 29 September 2014, Thuli Ndlovu, leader of Abahlali, was shot to death in her home in KwaZulu-Natal province, following her involvement in investigations regarding allegations of corruption and illegal conduct by the Councilor of Ward 12, relating to the distribution of public housing units.

Ms. Ndlovu’s murder was the most recent in a series of violent acts perpetrated this past year against shack dweller leaders who have been struggling to defend the human rights of residents of South Africa’s informal settlements. Last year, three other community leaders affiliated with the movement were murdered after organizing to resist forcible evictions in the Cato Crest settlement, also in KwaZulu-Natal. More housing activists have allegedly been shot and wounded by eThekwini Municipal Land Invasion Unit, the law enforcement unit tasked with carrying out evictions and demolitions in settlements that have been deemed illegal. Several Abahlali leaders have also reported receiving numerous death threats via telephone calls and SMS messages, as well as in-person during conversations with municipal authorities.

ESCR-Net called on the Government of South Africa to:

1. Immediately cease all threats, acts of intimidation, violence, and unlawful or arbitrary arrests against shack dwellers and their organizational leaders in South Africa;

2. Provide effective protection for leaders of Abahlali baseMjondolo against any unlawful acts and human rights violations;

3. Launch effective, independent, prompt and impartial investigations into all alleged crimes that have been perpetrated against shack dweller leaders, particularly the murder of Ms. Ndlovu, and ensure that the perpetrators are brought to justice and that victims are provided with effective remedies; and

4. Undertake all necessary steps to eliminate corruption in the allocation of public housing, forced evictions and unlawful demolitions affecting residents in informal settlements and shantytowns and to ensure that the human rights, including adequate housing and dignity, of South Africa’s shack dwellers are guaranteed and protected.