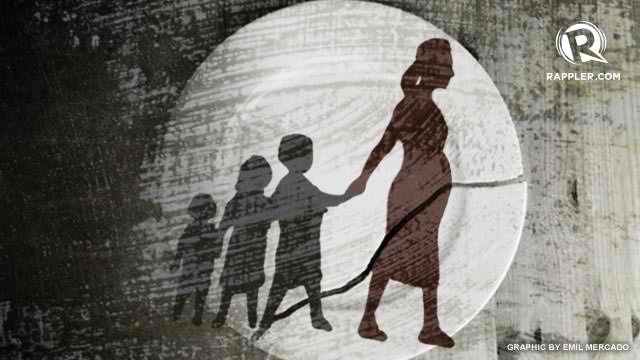 In April 2015, CEDAW reported how Manila’s Executive Orders 003 and 030 deprive women of their right to fully access RH information and services.

The Philippine government, however, is accountable for Manila's actions, CEDAW stressed:

"Decentralization of power through devolution does not in any way negate or reduce the direct responsibility of the State party to fulfil its obligation to respect and ensure the rights of all women within its jurisdiction." – UN CEDAW

It added that it is "discriminatory" for a country to refuse to legally provide women's RH services.

A tale of two policies

Although EO 003 does not explicitly prohibit citizens from using modern contraceptives, in practice it bans them across Manila's public health centers, CEDAW reported.

Even medical personnel were only trained on NFP methods.

“The City promotes responsible parenthood and upholds natural family planning not just as a method but as a way of self-awareness in promoting the culture of life while discouraging the use of artificial methods of contraception like condoms, pills, intrauterine devices, surgical sterilization, and other.” – EO 003

EO 003 was introduced in 2000 by then Manila Mayor Lito Atienza, former president of Pro-Life Philippines, an organization advocating the exclusive use of NFP. Atienza’s policy was “reinforced” by the national government, CEDAW found, as seen in the National Family Planning Strategic Plan 2002-2006, which stated that “NFP is the only method acceptable to the Catholic Church.”

“Religious ideology and gender stereotypes should play no role in whether a woman can get the reproductive health care and information she needs,” argued Nancy Northup of the Center for Reproductive Rights, an international RH rights organization.

EO 030, however, prohibits Manila from using LGU funds in purchasing artificial contraceptives. On the upside, it allows the donation of contraceptives from non-governmental (NGOs) and the Department of Health (DOH).

But CEDAW argued that EO 030 “did not address the flaws and weaknesses of the health system as a whole, which had resulted from the implementation of EO 003.”

The new policy failed to provide the “means to make these choices available and affordable.” The LGU only transferred its responsibility – to provide RH services – to “NGOs, donors, and third parties.”

Who suffered the most from Manila's policies? Women, especially the poor.

The EOs resulted to “detrimental consequences for economically disadvantaged women and drove them further into poverty by depriving them of an opportunity to control and space their number of children,” CEDAW said.

The policies not only impact women’s RH, but also other aspects of their lives:

Although NFP is a valid method, it does not always work for everyone. It requires knowledge and consistency, which not all couples have. Hence the need for artificial contraceptives as another option. (READ: Is learning safe sex unsafe?)

Much laws, no teeth

In 2009, the country enacted the Magna Carta of Women, protecting women from all forms of discrimination. In effect, any policy contradicting the Magna Carta shall be repealed or modified.

In 2008, DOH issued guidelines on improving maternal and child health among LGUs, including the provision of modern family planning services and the promotion of "informed choice.”

“No mechanism or system was established by the central government to monitor the compliance of LGU policies with national policies and to monitor their implementation at LGU level.” – UN CEDAW

CEDAW added that nobody examined whether Manila’s EOs complied with DOH’s guidelines.

While the Local Government Code allows LGUs experiencing financial constraints to ask national agencies for assistance, CEDAW reported that Manila “did not take sufficient measures to comply with this provision.”

The national government’s “unsatisfactory response” to Manila’s situation resulted from the “lack of proactive action” among concerned agencies.

In June, Manila requested the DOH to “reprogram remaining available funds to modern family planning.” Some health centers then provided contraceptives and information materials as of September and October 2012, CEDAW reported.

CEDAW, however, said it was not informed on how Manila could sustain this. 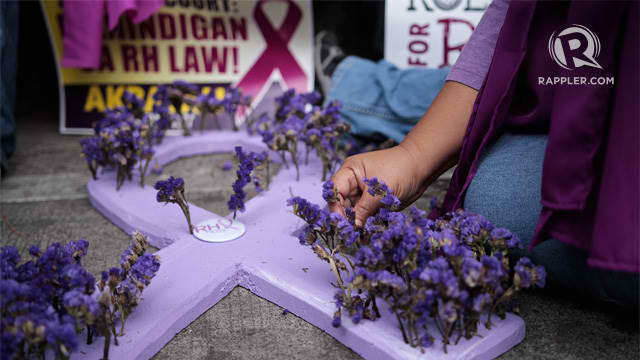 In December, the RH bill was signed into law, but not without delays. Its constitutionality was only upheld in 2014, while full implementation has yet to be felt.

Health services have been devolved to LGUs since 1991, but not all deliver. CEDAW sees the RH law as an “essential tool to address the visible shortcomings of the current decentralization system,” as well as Manila’s flaws.

In light of Manila's violations on women's rights, CEDAW advises the Philippines to:

In 2008, 20 citizens actually filed a case against Manila City, urging EO 003's unconstitutionality. But the petition was dismissed in 2014, saying the case has been "mooted" by the passage of the RH law: 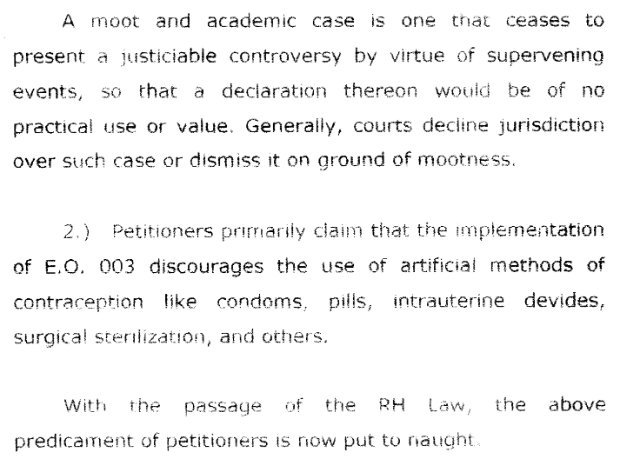 Excerpt from the Regional Trial Court decision on 'Osil' case. Rappler obtained a copy from the Center for Reproductive Rights

In simpler terms, the court found the petition irrelevant since the RH law already resolves the problem.

“But it’s best that the city government repeals it [EOs] so there will be no questions whether they’re still existing or not,” said lawyer Claire Padilla of EnGendeRights, one of the NGOs that nudged and worked with CEDAW on investigating Manila.

“Because we received reports that in November 2012, some clinics still implemented the EOs," Padilla added.

On Tuesday, May 5, Rappler called the office of incumbent Manila Mayor Joseph Estrada for comment, but his staff said he is currently abroad and would discuss the matter upon his return.

"With the release of the [CEDAW] findings," Padilla stressed, "We hope that the Philippine government will comply with its international treaty obligations to ensure that the women and girls in Manila City and throughout the Philippines are not discriminated against in accessing sexual and RH services.”

Until then, several women in and out Manila might continue handling their reproductive health as if playing with fire, with no one and nothing helping them aid or prevent possible burns. – Rappler.com